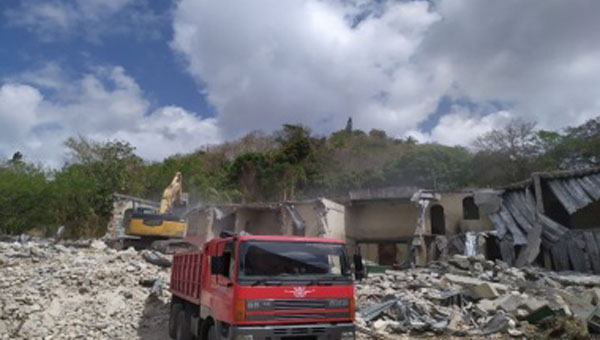 Workmen seen demolishing -- and carting away -- historic building in the heart of Castries, St. Lucia's capital.

CASTRIES, St. Lucia, May 25, 2020 (CMC) – The St. Lucia government has defended its decision to demolish the building, which once housed a prison, here, even as environmentalists condemned the weekend demolition of the structure that was constructed in 1892 in the center of the capital.

“We all know the history of this, going back 18 months ago to September 2018, when the Trust took steps to protect this building,” said Bishnu Tulsie, the Director of the St. Lucia National Trust (SLNT), adding that the plan was to have it integrated into the proposed Hall of Justice.

“At that time, the Trust got a commitment, from the Attorney-General, that the government will not demolish the building,” he added.

But in a statement, posted on his official Facebook page, Prime Minister, Allen Chastanet, said that for more than 20 years, police officers have had to work, in less than ideal conditions.

“From offices being infested with mold, to not even having office furniture to accommodate them, to carry out basic administrative duties. For just as long as our police have had to endure substandard working spaces, the judicial system has had to endure some of these very challenges, with poor quality courtrooms, insufficient accommodation and inadequate security,” he wrote.

Chastanet argued that these concerns had been brought up by previous administrations, insisting that “the poor working conditions, which our police officers and judicial officials endure, on a daily basis, have often been cited as one of the major factors affecting the morale and efficient functioning of our security and justice systems.

“Though we have invested in making upgrades to our police stations and court houses, this is not enough! This is an issue, which my government has decided to pay full attention to, once and for all,” he added.

On September, 9, 2018, the Trust successfully petitioned the High Court to issue an Order to stop the demolition of the buildings, and associated burial ground, known as the Castries Prison, formerly the Royal Gaol, until further consideration of its application.

The Order instructs the contractor, Cyril Dornelly, the Ministry of Infrastructure, Ports, Energy and Labour and the Commissioner of Crown Lands, and their agents, employees, officers or servants, to cease any action, contrary to this Order. The Development Control Authority is also listed as a respondent in this matter.

But Chastanet said that in October 2018, “we commenced the preparations of the site for the construction of a new Police Headquarters, which will, strategically, include six court rooms to centralize the judicial system, as well as for security purposes. This was delayed for one year and six months, due to an injunction, which was filed.

“How much longer must our police and justice officials wait, before they get the working home they so rightly deserve? Whilst the debate continues, I invite you to view the plans for the construction of the new police headquarters and Halls of Justice in Castries,” he wrote on his Facebook page.

However, Tulsie said that the St. Lucia government cannot be trusted, and it is setting a “dangerous precedent” for the future.

He said, when he received a call, on Saturday, informing him of the demolition of the building, he came to the conclusion “government has gone against the agreement, and gone ahead to destroy a building that is one of the oldest in Castries”.

“The building is gone – there’s nothing we can do about that,” he said, adding what was most troubling, was that the government entered into what the SLNT considered to be a legally-binding agreement, yet went ahead and pulled down the former prison.

He said the Trust would be exploring whether there are any legal options, to ensure, in the future, that the government sticks to its word.

“If we let this go, then the government could agree to anything and do what it wants – it could agree to pay civil servants COVID-19 relief and then don’t do it. It is a dangerous precedent that is being set here,” he added.