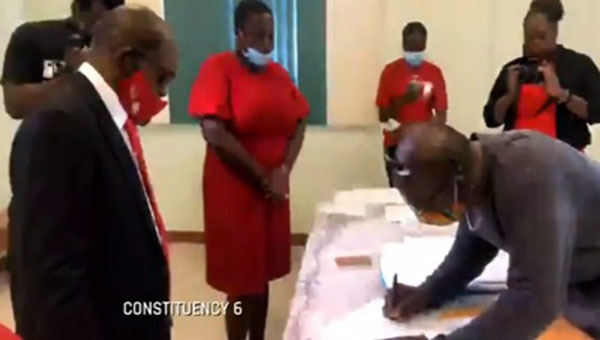 BASSETERRE, St. Kitts-Nevis, May 27, 2020 (CMC) – The two main political parties, today, named candidates to contest all 11 seats in the June 5 general election on the twin-island Federation — with both leaders predicting victory.

Prime Minister, Dr. Timothy Harris, who is leading his coalition, Team Unity, into the polls, told reporters, after being nominated to contest the Constituency Number 7 that he has represented since 1993, that he remained “optimistic” about the outcome of the election.

“I am optimistic, because we belong to the people,” Harris said, making reference to the various projects that his administration had completed, during its first, five-year-term in office.

“I expect the people, again, to repose their confidence in me, having regard…to the outstanding relationship that we have developed,” he said, adding “so I feel very satisfied …and I expect, on election day, they will come out, in large numbers, vote early, and vote for Timothy Harris”.

Harris’ Team Unity consists of the people’s Action Movement (PAM), the People’s Labour Party (PLP) and the Concerned Citizens Movement (CCM) that came together in 2013 to contest the 2015 election, winning seven seats.

PAM and PLP will contest all eights eats on St. Kitts, while the CCM, which controls the Nevis Island Administration (NIA), will contest the three seats, up for grabs there. 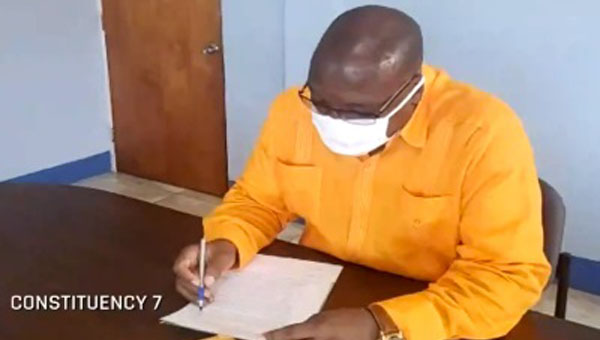 But Leader of the main opposition, the St. Kitts-Nevis Labour Party (SKNLP), Dr. Denzil Douglas, told supporters that June 6 would be a public holiday, in celebration of the party’s victory, the previous day.

He said he was thankful to the constituents, who supported his nomination, a reference to the decision, by the High Court, to remove him as Opposition Leader, in the last Parliament, after the government claimed he had given up his citizenship, when he accepted a diplomatic passport from Dominica.

“All morning, all week, I have been receiving all kinds of messages…but I will not be daunted by the efforts of Timothy Harris to stop me,” he said, adding “I thank you for your prayers, your support.”

Douglas said that the campaign, which is being held in a period when the country is under a state of emergency and a curfew, due to the coronavirus (COVID-19) pandemic, was proceeding well, despite efforts, by elements of the ruling coalition, to disrupt the activities.

“I am saying to you, my people, stay strong, never give up, always defend your rights…and so we now move from nomination to the general election, on the fifth day of June and, on the sixth day of June, it is a holiday, for you to celebrate,” Douglas said.

His SKNLP will contest all the eight seats on the mainland and will support the Nevis Reformation Party (NRP) in Nevis.

Meanwhile, the State-owned ZIZ Broadcasting Corporation said, today, that it would provide equal broadcasting time to the five registered political parties, and any nominated independent candidate, ahead of the June 5 election.

“From today, Wednesday, May 27th (Nomination Day) up to 11:59pm on Thursday, June 4th, ZIZ Broadcasting Corporation will allocate a total of eight hours (480 minutes) of paid programming to each registered political party and nominated independent candidate. For the first time, political ads, from all political parties and candidates, will be aired on ZIZ,” it said in a statement.

“ZIZ will also allocate an additional 30 minutes, per day, free of charge, to each registered political party and independent candidate, the cost of which will be borne by the State, as a gesture of goodwill,” the 60-year-old corporation said.

It said that it was encouraging “all parties and candidates to take advantage of this offer that will give voters the opportunity to be exposed to differing views and perspectives, on matters of public concern”.