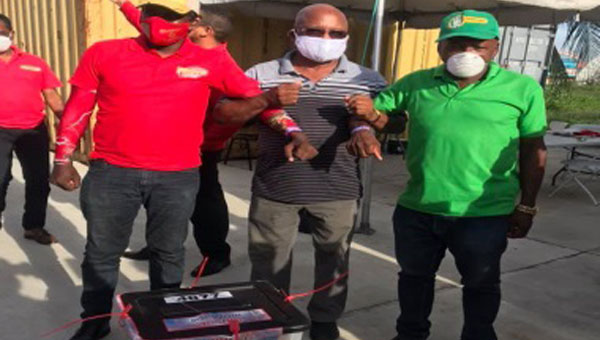 Agents from the two main political parties -- the PPP/C in red; and APNU/AFC in green -- and one of the smaller parties, share a moment of celebratory unity, with the last ballot box that was recounted in front of them, outside of the Arthur Chung Convention Centre, yesterday.

GEORGETOWN, Guyana, June 8, 2020 (CMC) – Guyana moved into the next phase of the verification of the disputed March 2 election, yesterday, after the final ballot box in the 33-day-long, national recount exercise was completed, and the main opposition — the People’s Progressive Party/Civic (PPP/C) — was shown to be victorious.

“I want to make it very clear, that this phase of the exercise is not over, until the declaration is made, but the recount is over and we have inputted all the SORs (Statements of Recount) and the results are showing, exactly what we said with our SOPs (Statements of Poll), the PPP/Civic, would win these elections, by well over 15,000 votes,” PPP/C Presidential Candidate, Irfaan Ali, told reporters, outside the Arthur Chung Convention Centre, where the recount was held.

Ali stated that it was now time for the country to settle down, and await the final declaration from the Guyana Elections Commission (GECOM).

Earlier in the day, the ruling coalition APNU/AFC — comprised of A Partnership for National Unity (APNU) and the Alliance For Change (AFC) — warned that GECOM cannot use any “fraudulent” votes to declare “credible” results of the elections.

“What was uncovered, throughout the recount process, and magnified on Thursday, June 4th; Friday, June 5th; Saturday, June 6th; and Sunday, June 7th, nakedly exposed the smoking gun of the obscene People’s Progressive Party’s illegality, on the East Coast of Demerara, which is “the nest”, in perpetrating fraud on the March 2, 2020, General and Regional Elections,” APNU/AFC claimed, in a statement.

The APNU/AFC said that there is no option, but for GECOM to reject all ballots, in all 10 districts, that cannot be validated, adding that some of the votes, cast in the Lower East Coast of Demerara, which cannot be validated there alone, amount to “tens of thousands”.

“These votes are bogus, fraudulent and cannot withstand scrutiny,” it noted, adding “what was uncovered in the ballot boxes, from polling places on the lower East Coast Demerara, provides unequivocal and incontrovertible evidence that massive and systematic electoral fraud was unleashed on March 2nd.”

But Opposition Leader and PPP/C General Secretary, Bharrat Jagdeo, dismissed the allegations, saying that the APNU “lost the elections”.

‘They lost the elections, from day one, and have refused to come to grips with that fact,” he told reporters.

On Saturday, President David Granger, in a radio and television broadcast, said the population should await the completion of all four stages of the national recount process.

“I encourage everyone to await the completion of the four stages – the current recount; the reports of the Chief Elections Officer and the CARICOM (Caribbean Community) observers; the review by the Elections Commission; and the declaration of the final results by the Chairman of the Commission,” he advised.