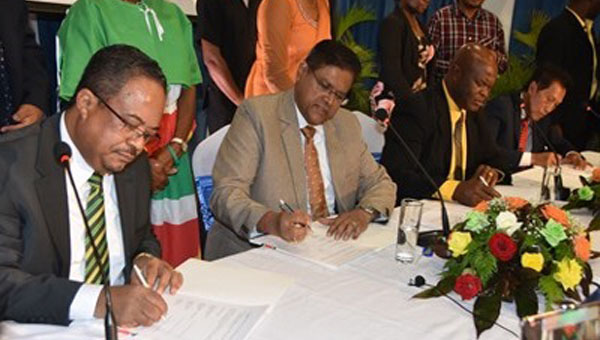 PARAMARIBO, Suriname, June 10, 2020 (CMC) – Representatives of the four opposition political parties, involved in the formation of a coalition government, here, following the May 25 inconclusive general elections, have held talks with a number of organisations, including the Suriname Bankers Association and the Medical Mission, as part of their strategic meetings with various institutions.

“The crises facing our country can only be tackled through concerted effort,” said the Progressive Reform Party (VHP), the Algemene Bevrijdings- en Ontwikkelingspartij (APBO), the National Party of Suriname (NPS) and the Pertjajah Luhur (PL), in a statement following the talks on Tuesday.

The opposition parties have, according to the elections preliminary results, won 33 of the 51 seats in the National Assembly, but President Desi Bouterse’s National Democratic Party (NDP), which won 16 seats, has requested a re-count of the ballots cast in the elections.

The authorities, here, have not yet released the official results of the elections, even as the opposition parties have called on the NDP to support them in the National Assembly, when the election of the President of the country takes place, in August.

According to the statement, during yesterday’s meeting with the bankers and medical groups, the representatives gave their views on the financial and economic problems facing the country.

The political parties said in the statement that, as a result of those discussions, they intend to promote transparency and to make policy, based on the needs of the people.

They added that the discussions with the organisations, including the Association of Surinamese Manufacturers and the Association of Small and Medium-Sized Enterprises in Suriname, were held in a “frank atmosphere”, and “it is also good if the parties also have good insight into each other’s wishes and expectations”.