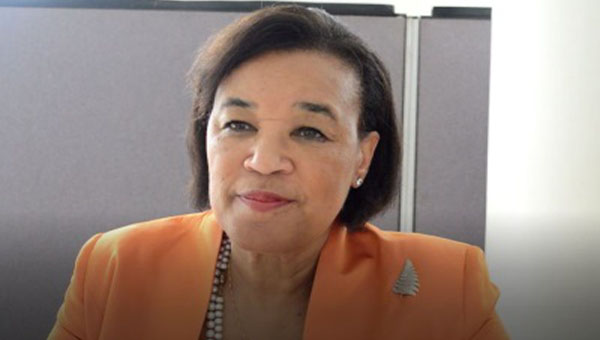 Britain’s Prime Minister, Boris Johnson, in a June 8 letter, wrote that a “significant and diverse number” of Heads of government, “from across the Commonwealth”, had opposed the idea of the Dominica-born Scotland being reappointed for another four years, without facing re-election.

In the letter, which was obtained by the British Broadcasting Corporation (BBC), Prime Minister Johnson wrote, “as you will recall, I wrote to you on May 13, in my capacity as Commonwealth Chair-in-office, to ask whether there were any objections to the proposal, from Her Excellency the Prime Minister of Barbados, subsequently supported by others, that we should reappoint Baroness Scotland as Secretary-General of the Commonwealth, for a second four-year term now”.

“In response to my letter, a significant and diverse number of colleagues, from across the Commonwealth, have communicated that they do not support that proposal, but prefer that the decision, on the next substantive secretary-general appointment, should be taken at CHOGM, according to our established practice. Therefore, I must respectfully confirm that there is no consensus for the immediate reappointment of the secretary-general, for a second four-year term,” Johnson added.

Caribbean Community (CARICOM) leaders, at their inter-sessional summit in Barbados in February, had “expressed their overwhelming support for the renewal of the term of office of the Secretary-General”.

St. Vincent and the Grenadines Prime Minister, Dr. Ralph Gonsalves, said, in February, he was confident that Scotland would be reappointed to serve a second term.

“We think that the attempts to hound her out, are entirely unacceptable, and that those, who are doing so, must cease it. It is unbecoming,” he said then, adding “I am very confident that she will be re-elected to serve as Secretary-General of the Commonwealth for a second term.”

But Prime Minister Johnson, who is the current “Chair-in-office” for the Commonwealth, said he hopes that the Commonwealth Heads of government can, instead, agree just to extend Scotland’s contract, temporarily, until they meet next year.

The 54 Heads of government had expected to decide Lady Scotland’s future at their big biennial summit – known as CHOGM – in Rwanda this month, but the meeting was postponed because of the coronavirus pandemic.

A Commonwealth Secretariat spokesman said the proposal for automatic reappointment had been made, because of the uncertainty of when CHOGM might take place, probably next year.

Commonwealth governments now have, until June 22, to decide whether to extend Lady Scotland’s current term, until next year. There is a need for haste, because Scotland’s existing contract expires on June 27.

This is the second time that Commonwealth Heads of government have rejected the automatic reappointment of Scotland. Last year, some supportive member states put forward the proposal, but twice as many countries opposed the idea.

During her visit to Barbados in February, the embattled Commonwealth Secretary-General, defended her track record and that of the Secretariat, under her leadership, telling the Caribbean Media Corporation (CMC) that it had become the “most transparent and accountable system of any international organisation”.

In January, Britain suspended its funding for the Commonwealth Secretariat, after Scotland was criticised, by internal auditors, for awarding a lucrative consultancy contract to a company, run by a friend.

Auditors also said that the Secretariat waived procurement rules, no less than on 50 occasions, over a three-year period.

However, Scotland told CMC  that “there are a number of misconceptions, and it is very unfortunate that a number of stories have been posted, which are inaccurate and fallacious”, and maintained that the proper procedure was followed, when the contract was awarded to fellow Labour Peer, Lord Patel.

Some Commonwealth countries, including Britain, have suspended voluntary contribution to the Commonwealth Secretariat, in the wake of the audit report.

London has withheld its funding of £4.7 million, joining New Zealand and Australia in doing so, until the Secretariat’s financial systems are tightened up, and tested, by external auditors.

But the 64-year-old Commonwealth Secretary-General said, “I have been told, and I can only believe what countries tell me, that they wanted to have certain issues clarified, before the money could be sent forward.

She also questioned then, whether the criticisms, levelled against her, were an effort to “distract us so we won’t focus on our work”.

“I, as Secretary-General, on behalf of all 54 countries, am determined that that strength, that family feeling, that collaboration, that cooperation, will not falter,” Scotland stressed.

Prime Minister Johnson is supportive of a temporary extension of Scotland’s current term, which he says “would follow our established practice, and would also be the option most consistent with the spirit” of the current rules, “according to which secretaries-general are to be appointed by us, collectively”.

A Commonwealth spokesperson said “the reappointment process for Commonwealth Secretary-Generals occurs, when leaders gather for the biennial Commonwealth Heads of Government Meeting (CHOGM).