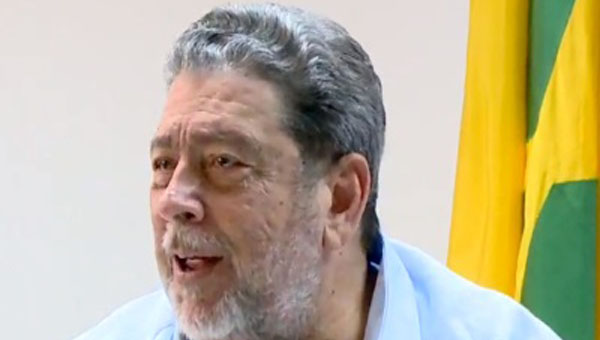 CARICOM's incoming Chair, the outspoken, pulls-no-punches Dr. Ralph Gonsalves, who is also the Prime Minister of St. Vincent and the Grenadines.

GEORGETOWN, Guyana, June 12, 2020 (CMC) – The governing coalition – A Partnership for National Unity and the Alliance For Change (APNU+AFC) — has expressed concern, with statements, made the incoming Chairman of the Caribbean Community (CARICOM) Dr. Ralph Gonsalves, describing it as taking a “prejudicial” stance on Guyana’s elections.

The APNU+AFC, via a press statement, stated they were “surprised” at Gonsalves’s statement, since the national recount process, of votes cast in the March 2, General and Regional Elections, is still ongoing.

Gonsalves, who is the Prime Minister of St. Vincent and the Grenadines, had urged the Guyana Elections Commission (GECOM) to declare a winner of the elections, based on the figures from the results of the recount, which ended last Sunday.

However, the APNU+AFC, in its statement, highlighted that they are “concerned, as the incoming Chair of CARICOM, Dr. Gonsalves, has chosen to pronounce on a process that is still ongoing, and proposes to a direct constitutional body in another CARICOM Member State, in the execution of its duties”.

The coalition reminded that the four-stage process, which is gazetted, was agreed to by all political parties and CARICOM.

The first stage of tabulating the votes recently concluded, and the second stage is now in progress. That is the compilation of a matrix of the tabulated results, along with a summary of the observation reports, by the Chief Elections Officer, Keith Lowenfield.

According to the coalition, the reports will highlight the 7,929 instances of irregularities, which directly affected the validity of 257,173 votes.

Additionally, it was also pointed out, by the APNU+AFC press release, that the CARICOM scrutineering team has not yet submitted a report of its findings, as mandated by the gazetted order. This will then be followed by a review of the reports by the Elections Commission and, finally, a declaration of the results, by the Chairperson of GECOM, after having studied the report.

With that, the coalition further reminded that “the ongoing process is significant and important, not only for democracy in Guyana, but the wider CARICOM.  It is expected that CARICOM leaders would refrain from any actions or utterances that could undermine the legitimacy of the process and its credible conclusion”.

However, in its own press release, late last night, the main opposition, the Peoples Progressive Party/Civic (PPP/C) defended Prime Minister Gonsalves, recalling that the APNU+AFC “has had issues with the OAS, Carter Center, ABCE ambassadors, the PSC, senior US and UK government officials and every other person or organization that denounced their attempt to subvert the will of the electorate”.

The PPP/C explained that the latest victim is Prime Minister Dr. Gonsalves, and that the APNU+AFC attack on him, “is yet another of its attempts to try to bully CARICOM officials to submit to their will, and to turn a blind eye to their rigging”.

“As Guyanese, we must all condemn this personal attack against Dr. Ralph Gonsalves, and continue to resist APNU+AFC’s attempt to subvert our democracy,” the release concluded.