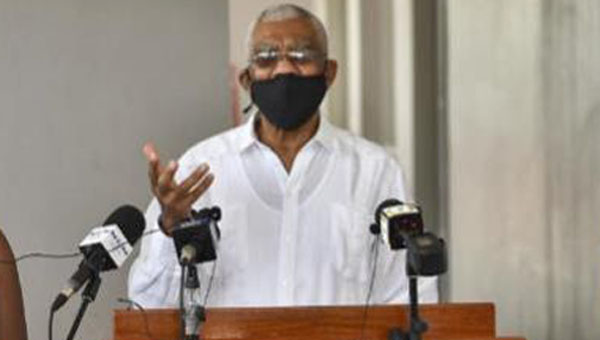 GEORGETOWN, Guyana, June 13, 2020 (CMC) – President David Granger proclaimed, last night, that Guyana is not a “lawless” state and the country’s elections commission (GECOM) should be allowed to perform its function, as nationals await the official declaration of a winner of the disputed March 2 election.

Under the Amended National Recount Order, there are four stages to be undertaken before the announcement of the official result of the election is made, and the third stage is supposed to be effected today, when GECOM’s Chief Elections Officer, Keith Lowenfield, presents his report to the Commission.

A three-member team from the Caribbean Community (CARICOM), which observed the recount process, is also expected to submit a report to GECOM, which the President said, has “to be considered”.

GECOM is then expected to — by its own Gazetted Order — announce the official results of the re-count exercise that was completed last Sunday, by next Tuesday, June 16.

President Granger, who will be 75-years-old on July 15, told radio listeners that at every stage of the recount process, he has abided by the Guyana Constitution, adding “I have paid attention to the courts, and I have said that I will abide by the ruling of the Elections Commission”.

Describing public comments on the ongoing election process as “reckless and premature”, he said people are being misled into believing the process is over, and called on everyone to allow GECOM to complete its work.

However, Granger noted that it is impossible to ignore that there is an abundance of evidence that certain elements have tried to use, to manipulate the outcome of the elections.

“We will continue to wait, we are patient, because democracy must not be rushed, the people must be satisfied that the outcome is not fraudulent,” Granger said, adding that the idea of the elections being nullified “is a possibility, because of the large number of anomalies and irregularities”.