New in Pride
Home / National News / How To Understand Police Violence: Not A Case Of Good Cop Vs. Bad Cop 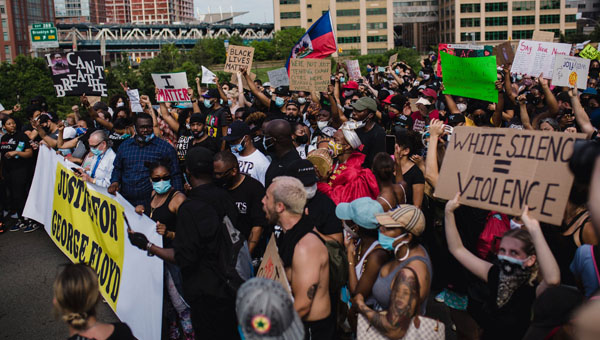 Anti-racism demonstrators during an anti-police violence protest, in support of George Floyd, who was killed by Minneapolis police, recently. Photo credit: Life Matters/Pexels.

How To Understand Police Violence: Not A Case Of Good Cop Vs. Bad Cop

Amidst the grief, disbelief and justified outrage at the killing of African Americans, many people want to make sense of what appears to be senseless police mayhem and violence. The killing of George Floyd and other African Americans by police has led to civilian protests and outrage, across the United States, and around the world.

The gaze has now turned to Canadian police.

Universities, news media, Hollywood, politicians and economic elites continually drum into our heads that police “serve and protect” — and so goes the police motto in Toronto. This narrative of police helps to fuel the fantasy that they are necessary in their present configuration. But whom and what police protect must be asked squarely.

Thick bureaucracies
Citizens, misunderstanding that they are the ones to be protected, have demanded increased professionalization. This has mainly contributed to an already existing tendency toward a thicker and more unresponsive bureaucracy.

Police are now an unprecedented powerful cultural and political force protected by unions, the brotherhood, police services acts, increased authority, lax prosecution and a protective blanket offered by the courts. The unfettered growth of so many branches of police raises legitimate concerns that we are in a police state.

Now is the time for people and groups to activate what the prominent sociologist, C. Wright Mills, called “the sociological imagination.”

In other words, we need to apply rational theory to explain the irrationality of the police, politicians and economic elites, given that capitalism is hardly rational. We need to pierce the bubble of ideologies that confuses the interests of the powerful as something good for all of society. 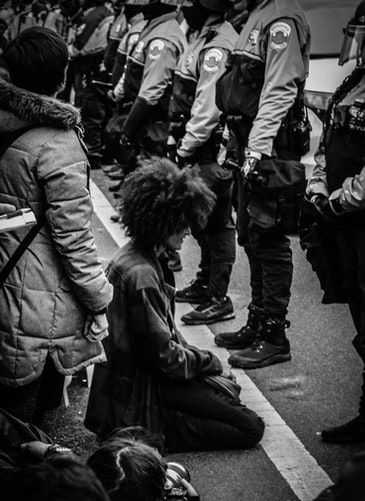 A protester kneels, in defiance of nearby police. Photo credit: Spenser Withans/Unsplash.

How to apply rational theory to the police
There is no good police versus bad police. The sociological imagination rejects personalizing explanations. Police are police; they are the states’ organ of repression.

In a social order that is based on social inequality, even the most benign and friendly cop is little more than an ideological prop to make us grateful that the state can be merciful and is your friend. Black people know otherwise.

After getting past the ideological trap of good versus bad cop, the next step is to ask two fundamental questions in terms of what the police are for. Whom do the police serve? What do they protect in a colonialist and capitalist social order?

The first part of the question implies that police protect “us” from that abstract noun the state calls “crime.” Incidentally, in protecting us from crime, police are empowered by law to break the law. Basically, this is state lawlessness.

A contradiction? Absolutely! But how to explain it?

The legal justification for police violence is key to understand liberal democracies. In a capitalist social order, the principal function of police is to maintain the order of mal-distributions of private and productive property.

Without a domestic armed force, the economic, social and political power of the ruling class and elites would not be possible. The police defend the interests of the powerful, and those whose disorganization is their powerlessness. This is not unlike what American law designates Racketeer Influenced and Corrupt Organization (RICO) or, more simply, a mafia.

A renewal of democracy
Police violence has always been the spark for the periodic bubbling over of public discontent with colonialism, capitalism, racism inherent to social inequality. There are a myriad of better scenarios than the current one.

The police must be defunded. We need a mix of citizens’ councils, Crown councils, courts and diminished roles for police and prisons as remedies for the problem of social inequality. Those citizens’ councils must not be co-opted and turned into an iron curtain of mass surveillance.

A new basis for social order is also required, such as a guaranteed basic income and democratic socialism.

This is all uncharted territory and there will be many unintended consequences.

Defunding, which means demobilizaion, could be a problem. As is the case in contemporary Mexico, Russia and elsewhere, former police and soldiers easily turn to armed brigandage, join paramilitaries or narcos. That might not happen here.

But given the last 40 years is increasingly dystopian and corruption already a serious problem in policing, nothing is to be ruled out.

Committing sociology is not about being right. It is about a frame of mind, of being open to critical interpretations and a way of asking questions about the dense fog of ideology that besets us.

Tamari Kitossa is an Associate Professor in Sociology, at Brock University.