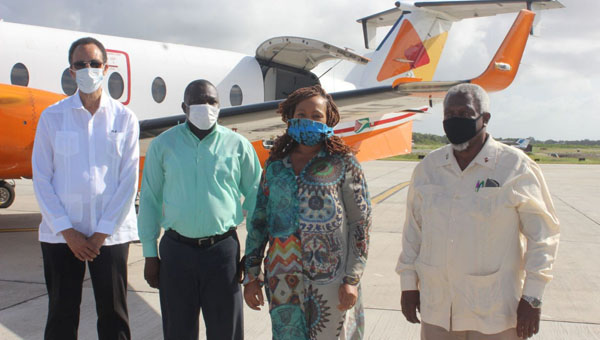 CARICOM Assistant Secretary-General, Foreign and Community Relations, Colin Granderson, (left) with members of the CARICOM Observer Team (from left to right) -- Sylvester King, Deputy Supervisor of Elections of St. Vincent and the Grenadines; Cynthia Barrow-Giles, Senior Lecturer in the Department of Government at the University of the West Indies (UWI); and John Jarvis, Commissioner of the Antigua and Barbuda Electoral Commission -- on their arrival in Guyana, last month. Photo credit: CARICOM.

GEORGETOWN, Guyana, June 15, 2020 (CMC) – The three-member, high-level Caribbean Community (CARICOM) team that monitored the recount of the ballots cast in the disputed March 2 regional and general elections, proclaimed that it did not “witness anything, which would render the recount, and by extension, the casting of the ballots…to have thwarted the will of the people”.

In addition, the team announced that it has seen nothing “preventing the election results and its declaration by GECOM (Guyana Elections Commission) from reflecting the will of the voters”.

In its 152-page report, a copy of which has been obtained by the Caribbean Media Corporation (CMC), the team — headed by Cynthia Barrow-Giles, Senior Lecturer in the Department of Government at the University of the West Indies (UWI); John Jarvis, Commissioner of the Antigua and Barbuda Electoral Commission; and Sylvester King, Deputy Supervisor of Elections of St. Vincent and the Grenadines — noted that the “actual recount of the vote was, indeed, transparent”.

The recount-scrutinising team noted the problems, encountered in the lead-up to the recount, but praised the GECOM workers, “who laboured long hours, over the course of thirty-three days, to bring the disputed election results to a near end, for this was just one of the four stages, outlined of the Gazetted Order on the national recount”.

The recount exercise ended on Sunday, June 7, and the main opposition, the People’s Progressive Party/Civic (PPP/C) claimed it showed that it had won the elections by more than 15,000 votes, while the ruling coalition, A Partnership for National Unity (APNU) claimed there were numerous instances of irregularities and anomalies.

The CARICOM team’s report is in sharp contrast to one delivered, last Saturday, by GECOM’s Chief Elections Officer (CEO), Keith Lowenfield, who claimed that the results did not meet the “standard of fair and credible elections”.

He alleged that approximately 55 percent of all votes cast for general elections stand to be impacted, due to “either anomalies and/or voter impersonation or unreconciled ballot boxes”.

In its report, the CARICOM team said that the “recounting of the votes was conducted with as much precision, as possible, and with absolutely no hint of bias shown, on the part of GECOM station workers”.

“Their impartiality, with respect to the actual vote recount was outstanding. Overall, while we acknowledge that there were some defects in the recount of the March 2, 2020 votes cast for the General and Regional Elections in Guyana, the Team did not witness anything, which would render the recount, and by extension, the casting of the ballot on March 2, so grievously deficient, procedurally or technically…or sufficiently deficient, to have thwarted the will of the people, and consequently preventing the election results and its declarations, by GECOM, from reflecting the will of the voters,” the document stated.

It emphasised that “a recount of votes means exactly that, a counting of the ballots cast. In this case, the so-called recount extended to issues, normally reserved for an audit of  ballots cast in an election”.

The team opined that the public utterances of some GECOM Commissioners, political pundits and politicians “may have sounded an ominous tone for the 2020 elections, with the partisan-driven and distorted narrative on migrant voting, phantom voting and implied voter impersonation”.

But it noted “we are of the …unshakeable belief that the people of Guyana expressed their will at the ballot box and, as a result, the three-person CARICOM Observer Team concludes that the recount results are completely acceptable”.

“There are obvious lessons to learn from this experience, which, going forward, the government and people of Guyana must make every effort to rectify, in the best interest of democratic governance.

“Many of the instances of irregularities that we witnessed, can be explained by either the incompetence of some of the Presiding Officers at the polling stations on March 2, 2020, and/or the failure to give adequate training, by GECOM, to its staff, on the varied possibilities, which may have arisen at the level of the individual stations,” the scrutineers pointed out.

The CARICOM team, which presented a series of recommendations for consideration, said that “though we must confront the inescapable fact that the recount was unreasonably long and consequently unjust to the voters and the people of Guyana, nonetheless, this dispute resolution has shown that the systems put in place have worked”.

“The national recount provided an opportunity for redress, and with the vigilance and effective systems of transparency, checks and balances, which we witnessed during the recount process, public confidence in the system, going forward, can be assured, once the corrective measures, which we have recommended, are taken,” the CARICOM team added.

It said that the recount process, despite “some of its administrative failings, despite some of the minor flaws, is not an indictment of the 2020 polls, and the Team categorically rejects the concerted public efforts to discredit the 2020 polls, up to the disastrous Region 4 tabulation.

“Despite our concerns, nothing that we witnessed warrants a challenge to the inescapable conclusion that the recount results are acceptable and should constitute the basis of the declaration of the results of the March 02, 2020 elections. Any aggrieved political party has been afforded the right to seek redress, before the courts, in the form of an elections petition.”