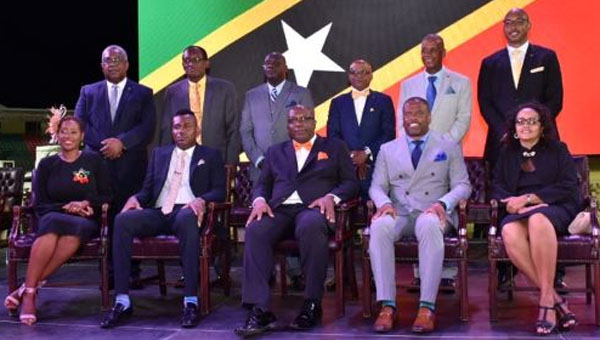 BASSETERRE, St. Kitts and Nevis June 15, 2020 (CMC) – At an inauguration ceremony at the Warner Park Cricket Stadium, yesterday, Prime Minister, Dr. Timothy Harris, unveiled his 11-member Cabinet, promising that it will deliver a stronger and safer future for the twin-island Federation, over the next five years.

Harris led the coalition Team Unity into a second consecutive term, following the June 5 general election, when it won nine of the 11 seats in the National Assembly.

The Prime Minister, who, on Sunday, publicly took the Oath of Office, the Oath of Allegiance and the Oath of Secrecy, said he was appreciative of the electorate for returning his administration to office with a bigger mandate.

“I am especially grateful that so many persons had the opportunity to participate in our vibrant democracy, here in St. Kitts and Nevis, and I promise all of you that the government, which I lead, will honour the faith that you have shown us,” Harris said.

He told the ceremony, attended by the Federation’s only living National Hero and former Prime Minister, Sir Kennedy A. Simmonds, that the new Cabinet stands ready to deliver for the people of St. Kitts-Nevis.

“We are determined and eager to see that our plan for safer streets, for bigger and better homes, and more opportunities for our young people is implemented, properly and successfully.

“I promise you that we will never become complacent, or take you, the people, for granted. We know that you have lent us your vote and that we must deliver for you, and deliver for the future of our country,” Harris added.

The following is the list of the members of the Cabinet.