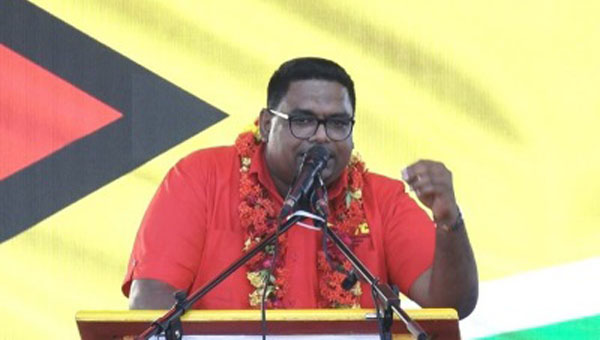 “The People’s Progressive Party is extremely happy with today’s decision of the Guyana Elections Commission (GECOM), to direct the Chief Election Officer to prepare a report, using the recount results, in keeping with Section 96 of the Representation of the Act, Chapter 1:03; paving the way for the official declaration of election results and thereby allowing for the swearing-in of Dr. Irfaan Ali, as the ninth Executive President of Guyana,” the PPP/C said in a statement.

The GECOM Chairperson, retired Justice Claudette Singh, had, earlier today, disclosed that she had requested that the Chief Elections Officer, Keith Lowenfield, to prepare a report to ascertain the results of the elections, in keeping with the laws of Guyana.

In a statement, GECOM said that in her decision to the Commission, today, “Justice Singh asserted that the Commission does not have the powers of a Court of Law to examine and re-examine witnesses, or to procure official documents, to determine the truth of the allegations contained therein.

“The Chairperson posited that she is of the opinion that some of the allegations are of a serious nature and must be addressed. However, Article 163 (1) (b) of the Constitution confers on the High Court the exclusive jurisdiction to determine the validity of an election.”

The recount exercise ended on June 9 and the PPP/C claimed that it showed it had won the elections by more than 15,000 votes; while the ruling coalition — A Partnership for National Unity (APNU) plus the Alliance For Change (AFC) — headed by President David Granger, claimed there were numerous instances of irregularities and anomalies. It was observed by a three-member Caribbean Community (CARICOM) team that later reported “we are of the …unshakeable belief that the people of Guyana expressed their will at the ballot box, and as a result, the three-person CARICOM Observer Team concludes that the recount results are completely acceptable”.

“There are obvious lessons to learn from this experience, which, going forward, the government and people of Guyana must make every effort to rectify, in the best interest of democratic governance. Many of the instances of irregularities that we witnessed can be explained by either the incompetence of some of the Presiding Officers at the polling stations on March 2, 2020, and/or the failure to give adequate training, by GECOM, to its staff on the varied possibilities, which may have arisen at the level of the individual stations,” the report noted in direct contrast to one submitted by Lowenfield that claimed that the results did not meet the “standard of fair and credible elections”.

The APNU-nominated GECOM Commissioners expressed disappointment with the decision of the Chairperson, with Commissioner, Vincent Alexander, saying while he might not agree with the her  decision, it is the situation that now exists.

“In essence, what she said is, while there is merit in the CEO’s report, it is a matter for a petition rather than for the Commission to deal with that,” Alexander said, adding it is clear that the Commission has lots of work to do, as it moves forward.

Another coalition-appointed Commissioner, Charles Corbin, said the Chairperson indicated that the issues raised, about anomalies during the vote recount, were very significant, but they would have to be taken before the Court and not before the Elections Commission.

“The Chair has acknowledge that the issues raised are significant but it was her disposition that rather than the Commission pronounce on those issues, those issues should form the basis for a petition,” Corbin said.

In its statement, the PPP/C said Tuesday’s decision is in line with earlier expressed views that GECOM is not a court of law, “therefore it has no jurisdiction to hear allegations of irregularities, which, in any case, has been totally discredited by the report of the CARICOM team, and aggrieved parties can seek redress by way of an Election Petition to the court.

“The Commission agreed that GECOM has no jurisdiction to annul an election, since no such power was conferred onto it, under Article 162 (1) (b) of the Constitution. The PPP wishes to commend the GECOM Chair, retired Justice Claudette Singh, for standing on the side of rule of law and upholding the Constitution of Guyana.”

“The move towards a speedy transition to a democratically-elected government will allow our nation to focus on the challenges of the COVID-19 pandemic, unemployment and issues related to the economy, among others,” it added.