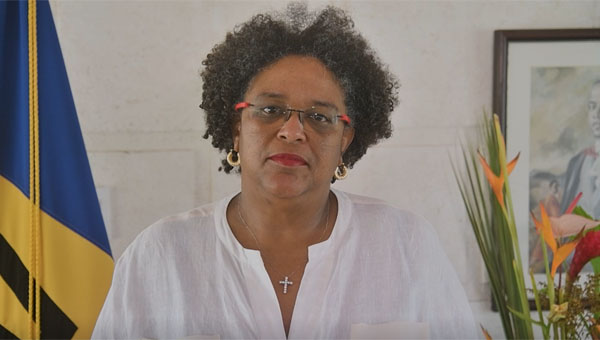 Barbados Prime Minister, Mia Mottley, rationalised that the country couldn't afford to keep the tourism sector partially closed, as it accounted for 45 percent of all economic activity.

GEORGETOWN, Guyana, June 24, 2020 (CMC) – The Caribbean Community (CARICOM) expressed concern, yesterday, at the developments in Guyana, where the official results of the disputed March 2 regional and general election is yet to be officially declared.

CARICOM Chair and Barbados Prime Minister, Mia Mottley, in a statement, lamented “many of us have observed, with great sadness, what has been transpiring in Guyana”.

“It is more than 100 days since the people of Guyana went to the polls. And yet, there is no declared result. From the very beginning, we have been clear, and said, consistently, that every vote must count and every vote must be made to count in a fair and transparent way,” she recounted.

But she noted that “regrettably, we have seen a level of gamesmanship that has left much to be desired, and has definitely not portrayed our Caribbean region in the best light”.

“This is definitely NOT our finest hour, and we must not shy away from that reality,” she declared, adding that CARICOM “is concerned at reports that the Chief Elections Officer has submitted a report to the Guyana Elections Commission (GECOM), which is contrary to the directions given by the Commission, and which does not reflect the results of the recount process, as certified by the very staff of the Guyana Elections Commission, and witnessed by representatives of the political parties.

“Indeed, these numbers and the certification of them were also witnessed by our CARICOM Observer Team. They travelled to Guyana — in spite of the pandemic and the risk to themselves — and they scrutinised the recount process,” Mottley said.

The Trinidad and Tobago-based Caribbean Court of Justice (CCJ), Guyana’s highest court, said, yesterday, that it would issue an order, which will continue to put a hold on the Court of Appeal ruling, on Monday, regarding the disputed elections.

The CCJ has informed all parties to the dispute, that it “will, no later than Wednesday, 24th June, 2020, issue an Order that (a) maintains the status quo, until further notice; (b) orders the holding of a case management conference in the matter on Thursday 25th June, 2020 at 3:00 p.m (local time), with a view towards (c) a full hearing of all the matters in dispute on Wednesday 1st July, 2020 at 10:00 a.m”.

The statement by the CCJ comes after GECOM’s Chief Elections Officer, Keith Lowenfield, submitted his report to the chairperson of the Guyana Elections Commission (GECOM), yesterday, showing that the ruling coalition — A Partnership for National Unity (APNU) and the Alliance For Change (AFC) — had won the disputed elections.

In his letter to the GECOM Chairperson, retired Justice Claudette Singh, the Chief Elections Officer said that he had “taken note of the guidance of the Court of Appeal…in the preparation of my report, under Section 96 of the Representation of the People’s Act”.

He said that his report contains “a table showing the credible and valid votes cast, in accordance with the Representation of the People’s Act”.

According to Lowenfield’s tabulation, the coalition received 171, 825 votes as compared with 166, 343 votes cast, on behalf of the main opposition, the People’s Progressive Party/Civic (PPP/C).

Based on his calculation, the coalition APNU+AFC will have 33 seats in the National Assembly, with the PPP/C gaining 31 seats and the parties on the Joined Lists gaining one seat.

Following the June 9 national recount of the votes cast in the election, the PPP/C said it had won the polls by a margin in excess of 15,000 votes.

Mottley said that the CARICOM Observer Team “was of the unshakeable belief that the people of Guyana expressed their will at the ballot box on March 2, and that the results of the recount, certified as valid by the staff of GECOM, led to an orderly conclusion, on which the declaration of the results of the Election would be made.

“Therefore, we must ask, on what grounds and by what form of executive fiat does the Chief Elections Officer determine that he should invalidate 1 vote, far less over 115 000 votes, when the votes were already certified as valid by officers of the Guyana Elections Commission, in the presence of the political parties.

“We must remind all, that if there is any evidence of fraudulent or improper conduct, then there is a clear and well-accepted route to deal with these matters. It is through an Election Petition to an Election Court.”

Mottley said any attempt to provide numbers, different from those certified by the staff of GECOM, has left many in shock, and wondering what next will happen to frustrate the will of the Guyanese people.

“The role and focus of political parties must be useful and not obstructive, in embracing and promoting the clear and expressed will of the people. When we confuse and frustrate that will, is when we begin to sow the very seeds of discord and acrimony that we are sworn to dissuade and discourage.

“The Community holds the strong view that no voter must be disenfranchised, in determining the credibility of this or any election. It is this commitment, to a fair and transparent political process, that led us to send two Electoral Observation Missions – one for the Elections and one for the recount. In addition, four Prime Ministers accompanied me to talk to both sides and to urge patience, especially after the death of one person.”

Mottley said that CARICOM wanted to thank the Guyanese people for their patience and “as you await the finalisation of this process, we urge again, that you be patient and that you be committed to the fact that no electoral process can replace the life of any Guyanese. There must be room for all, regardless of who wins and who loses.

“I assure you that the Community remains committed to the people of Guyana, and remains resolute that the report of its Observer Mission was very clear in its conclusions, as to the will of the Guyanese people, as reflected in the recount, which they monitored,” Mottley said in her statement.