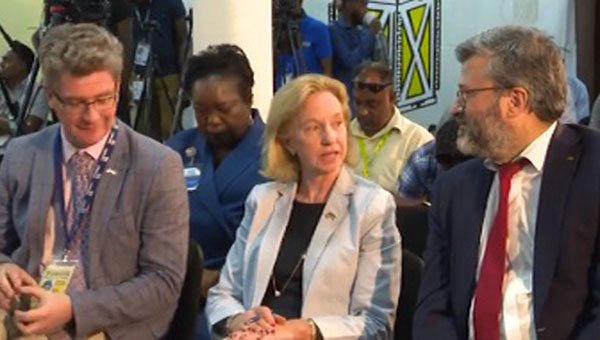 In a joint statement, the Ambassador of the United States, Sarah-Ann Lynch; British High Commissioner, Greg Quinn; Canadian High Commissioner, Lilian Chatterjee; and the Ambassador of the European Union, Fernando Ponz-Canto, said they “are concerned that 114 days after the 2 March elections, the people of Guyana continue to await the declaration of an election result”.

They expressed that it is important “in our view, that every vote, cast by every voter, be reflected in that declaration, in order to ensure that the will of the people of Guyana is respected”.

“That respect includes an election declaration of results that mirrors the order and integrity, displayed by the people of Guyana, GECOM (Guyana Elections Commission) and party officials, as witnessed by domestic and international observers during the 2 March general and regional elections.

“We also note that the CARICOM observer mission, referred to as “the most legitimate interlocutor” by President (David) Granger, concluded, on 15 June, that “nothing we witnessed, warrants a challenge to the inescapable conclusion that the recount results are acceptable and should constitute the basis of the declaration of results of the March 2, 2020 elections,” the high-level diplomats noted.

The four diplomats said they “believe election results are long overdue and, in that regard, we applaud the patience and peacefulness, displayed by the people of Guyana”.

“Pending the outcome of the appeal to the CCJ (Caribbean Court of Justice), we trust GECOM to meet its constitutional duty, to issue a declaration on the basis of the results of the recount, as confirmed by CARICOM, to ensure the democratic choice of the people is fulfilled,” they added.