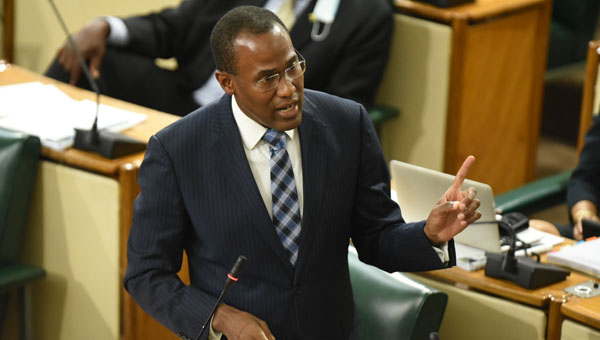 Jamaica's Minister of Finance and the Public Service, Dr. Nigel Clarke, makes a statement to Parliament on Tuesday, regarding the rate of poverty in 2018. Photo credit: Adrian Walker/JIS.

This was disclosed by Minister of Finance and the Public Service, Dr. Nigel Clarke, in a statement to Parliament, earlier this week.

Noting that the figures are contained in the Jamaica Survey of Living Conditions (JSLC), Clarke explained that this decline may be attributed to an increase in real gross domestic product (GDP), an increase in employment, an increase in the proportion of households in the lower quintiles that received remittances, as well as a slowing in the rate of inflation.

“The overall reduction in poverty for 2018 was driven by declines in all three regions. The Greater Kingston Metropolitan Area (GKMA) registered a poverty rate of 9.2 percent; Other Urban Centres (OUC), 12 percent; and Rural Areas, a poverty rate of 15 percent.

Turning to the main economic factors, accounting for the overall decline in poverty, the Finance Minister said that in 2018, Jamaica’s economy recorded a GDP growth rate of 1.9 percent, the sixth consecutive year of growth and the highest annual growth rate in 12 years.

“The out-turn for 2018 also marked the first time that Jamaica’s GDP level surpassed the levels, recorded prior to the global financial crisis,” he pointed out.

In addition, he related that the Mining and Quarrying industry grew by 33.8 percent, relative to 2017, which represented the strongest growth rate of the mining sector since 1989.

Further, the Agriculture industry, after a contraction in 2017, which was due to widespread flooding, rebounded to expand by 4.1 percent in 2018.

Additionally, the Finance Minister pointed out that the Construction industry recorded a growth rate of 3.3 percent, “largely on account of the record infrastructure spending, and the public infrastructure works undertaken by the government in that year”.

“The JSLC data showed that 56.9 percent of Jamaican households received remittances from abroad during 2018, a 7.8 percentage point increase, when compared with 49.1 percent in 2017,” Finance Minister Clarke revealed.

In addition, as at July 2018, data from the Labour Force Survey revealed that the net number of persons employed increased by 10,300, to 1,222,600 persons, compared with July 2017. This represents the fifth consecutive year of increased employment for this period.

Other contributing economic factors were one percent growth of the Wholesale and Retail Trade, which accounts for 17 per cent of the economy, as well as lowering of inflation, which was 2.4 percent – 2.8 percentage points lower than the 5.2 percent recorded in 2017.

Dr. Clarke pointed out that in the midst of negative developments, coming from the coronavirus (COVID-19), “it is good and reassuring to know that as this government carried on with the right economic policies that created jobs, reduced debt that provided more economic opportunities for all Jamaicans, the poverty rate was also declining, and declining at a rapid rate”.

“Pre-COVID-19, all of Jamaica’s economic variables, including poverty, were moving in the right direction,” he asserted.

The prevalence of poverty is calculated, annually, by the PIOJ, using the survey data on consumption expenditure.