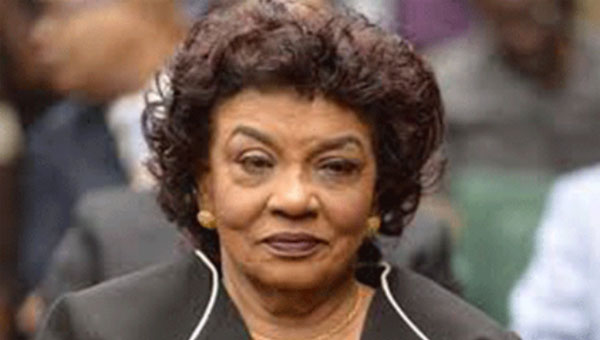 GEORGETOWN, Guyana, June 29, 2020 (CMC) – The Chairperson of the Guyana Elections Commission (GECOM), retired Justice Claudette Singh, has indicated she will not “actively participate” in the appeal filed at the Caribbean Court of Justice (CCJ), last week, by two senior members of the main opposition, the People’s Progressive Party/Civic (PPP/C), in relation to the local Court of Appeal ruling, regarding the disputed March 2 poll.

The Trinidad-based CCJ, Guyana’s highest court, is due to sit, on Wednesday, to determine, whether or not, it has jurisdiction to hear the appeal that was filed by Opposition Leader and PPP/C General-Secretary, Bharrat Jagdeo, and Irfaan Ali, the Party’s Presidential Candidate.

The two filed a Notice of Motion, before the CCJ, for several reliefs, including an interpretation of the words ‘more votes are cast’ in Article 177(2)(b) of the Constitution of Guyana.

The Court of Appeal, in its decision, ordered that the words are to be interpreted as meaning ‘more valid votes are cast’. The Court also ordered the decision be stayed for three days.

In a letter, written to the CCJ, through her attorney, Kim Kyte-Thomas, the GECOM Chair informed that she would no longer be participating in the hearing.

“Please bring to the attention of the Honourable Judges that, on further consideration, we do not wish to actively participate in the Appeal. In the circumstances, we do not wish to make any submissions,” the letter, signed by Kyte-John and sent to the Registrar, noted.

Former Attorney-General and PPP/C Executive Member, Anil Nandlall, clarified the Chair’s position by explaining, “The Chair has not ‘withdrawn’ from the appeal,” as suggested by some, though social and regular media.

“She will make no submissions. None necessary. Her previous submissions are on record. No harm done,” he noted.

During the case management conference, last week, GECOM and the Chief Elections Officer, Keith Lowenfield, did not make any appearance during the session, where the CCJ outlined the measures to be undertaken, by all parties, in filing submissions and counter-submissions, no later than 9.00 am (local time) tomorrow.

CCJ President, Justice Adrian Saunders, said all the lawyers, for all the parties, including A Partnership for National Unity/Alliance for Change (APNU/AFC) and the United Republic Party (URP), who have been added onto the matter, will be allowed to make oral submissions, on Wednesday.

Private citizen, Eslyn David, mounted her challenge, before the appellate court, pursuant to Article 177 (4) of the Constitution, which states “the Court of Appeal shall have exclusive jurisdiction to hear and determine any question as to the validity of an election of a President in so far as the question depends upon the qualification of any person for election or the interpretation of this Constitution….”

By a majority ruling of 2-1, the Court of Appeal did not grant all the remedies that David had sought in her motion, and also agreed to a stay of three days on the judgement.