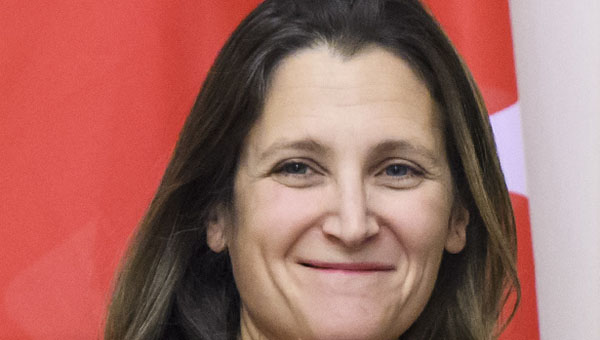 Canadian Deputy Prime Minister Chrystia Freeland's office in Toronto was the object of a protest during a rally, led by current and former international students, calling for changes to immigration rules during COVID-19 on September 12, 2020. Photo credit: Кабінет Міністрів України, CC BY 4.0.

With an aging and slow-growing population, Canada depends on immigration for economic and demographic growth. But the COVID-19 pandemic has effectively closed our borders and virtually halted the entry of immigrants.

Troubling new evidence about Canadian attitudes, shaped by the pandemic, suggests that even when borders finally reopen and the economic rebuilding begins, immigrants may no longer be as welcome as they have been in the past.

Outside Canada, the far right has stoked anti-immigrant rhetoric, and Canada is not immune to racism against immigrants.

Despite Canadians’ historical openness to newcomers, there are calls here at home for reducing the number of immigrants allowed to enter, and there is growing discrimination against immigrants, particularly people from Asia.

With concerns that the pandemic has made Canadians less open to immigration, researchers at McMaster University worked with Dynata Research to conduct a national survey in early August. The survey, which has yet to be published, asked 1,000 Canadians aged 25 and over about their attitudes toward immigration and their experiences during the pandemic.

The results raise questions about when, how and even whether Canada should be willing to reopen its borders to immigrants after the pandemic has been controlled.

Canadians ranked COVID-19 as the No. 1 problem currently facing the country. This was ranked far ahead of the economy and health care, which were ranked second and third, respectively. Crime, the environment, poverty, unemployment and other issues ranked much lower.

Amid growing levels of immigration into the country before the pandemic (more than 300,000 in 2019), about six in 10 Canadians had been comfortable with the number of immigrants entering the country.

In fact, most respondents said they felt immigration has made Canada a better place. Slightly more than 50 percent of respondents also said immigration has a positive impact on the economy and Canada’s cultural and social life. A large majority also felt that immigrants were welcomed into their communities. 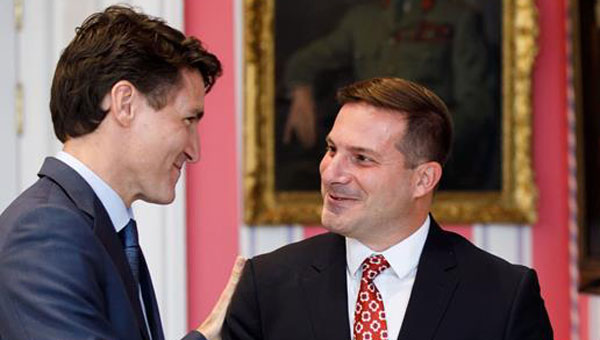 Marco Mendicino, right, is congratulated by Prime Minister Justin Trudeau, when he became Canada’s Minister of Immigration, Refugees and Citizenship on November 20, 2019. He recently announced a program to help asylum-seekers, who worked in the healthcare system during the COVID-19 pandemic, to gain permanent residence status. Photo credit: marcomendicino.ca

But a deeper dive into the numbers reveals clear signs of strain and discomfort over immigration, particularly looking ahead to when Canada emerges from the pandemic. For instance, more than half of respondents felt immigrants were not adopting Canadian values, and 46 per cent felt immigrants posed a risk to Canada’s social-welfare system.

More negative
While the majority felt their attitudes toward immigration had not changed since the pandemic started, some 20 per cent of Canadians said they have developed a more negative attitude toward it.

Perhaps most revealing is the respondents’ answers when asked if immigration levels should be increased after the pandemic to make up for the immigrants who could not make it to Canada during the lockdown.

Racism and discrimination toward racial minorities was also acknowledged, with one in 10 respondents reporting an experience of racism or discrimination since the pandemic started. Most respondents also felt that such incidents had increased since March 2020.

Lukewarm about immigration
Overall, the survey results suggest that Canadians may be less keen on immigration now than in the past.

More appear to be taking the view that closing the borders and limiting access would protect both the economy and the health of Canadians. But the nation’s economy and its reputation for welcoming newcomers would be at risk if these emerging attitudes take hold.

Canada still needs immigrants to help rebuild the economy, fill job vacancies and broaden the tax base. Despite the strain COVID-19 has placed on Canadian society, it’s imperative that Canada continues to be open to immigration.

Doing so means that its economy, population and labour force are ready for the post-pandemic world. Turning away immigrants after the pandemic would not just hurt the people hoping to make a new start in Canada, it would hurt the people who are already here.

Bruce Newbold is a Professor of Geography at McMaster University.