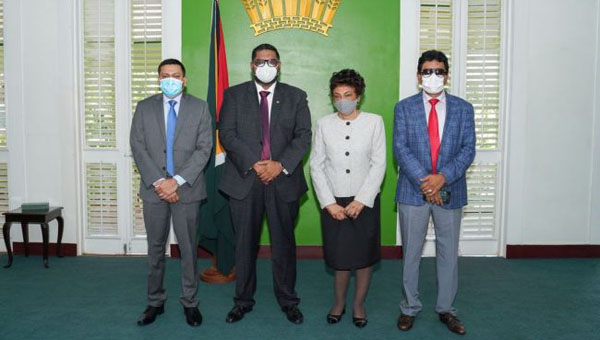 GEORGETOWN, Guyana Friday, October 2, 2020 — President, Dr. Mohamed Irfaan Ali, administered the Oath of Office to Manoj Narayan, who will serve as a government-nominated Commissioner to the Guyana Elections Commission (GECOM), and Ganga Persaud, who will be a member of the Public Service Commission (PSC).

An attorney at law by profession, Narayan will replace Robeson Benn, who resigned following his appointment as the Minister of Home Affairs and Member of the National Assembly.

Persaud replaces Geeta Chandan Edmond, who resigned, earlier in the year, following her nomination to the Opposition’s list of candidates for the General and Regional Elections.

President Ali, in his remarks, said these appointments are critical in the governance architecture of Guyana.

The Head of State pointed out that Manoj, a young lawyer, has already spent a lot of time dealing with electoral matters.

Alluding to his inauguration address, the President reminded that he has spoken about the urgent need to have a comprehensive understanding of what took place, over the last five months, at GECOM.

“With the appointment of Mr. Manoj on the Commission, I am sure it will help you, the Chairperson and the Commission, to advance the work, as you seek not only to address the many issues before you, in relation to the concluded elections, but, more importantly, in the strengthening of the electoral system, as we work towards having an electoral system in which the people of our country can have confidence; and one in which the international community can be comfortable that Guyana has strong democratic institutions that will always act in the best interest of democracy and the people of our country. I know that the task ahead is not easy for any one of you,” he said.

Ali noted that Persaud’s appointment comes at a very critical time, and the PSC’s work must continue, as there are a number of issues that have to be dealt with, including concerns of promotion and advancement in the Public Service.

“As a result, it was critical [for] us to move, urgently, in filling this vacancy so as to have the work of the PSC proceed and flow in a smooth manner. Mr. Persaud is no stranger to the Public Service. He has experience as a public servant, he has served on the Commission before, and he is a former Minister and Permanent Secretary.

Meanwhile, Attorney General Nandlall related that the government is pleased about the appointments, since there was a hiatus in the constitutional functions of those organisations.

“We are committed to constitutional governance and ensuring that the government operates in compliance with the Constitution and the rule of law. We had this vacancy at GECOM that we had to fill.

“As you know, there are ongoing investigations at GECOM and to facilitate those investigations, it is imperative that GECOM is fully constituted, so that decisions can be made reflective of the full Commission,” he said.