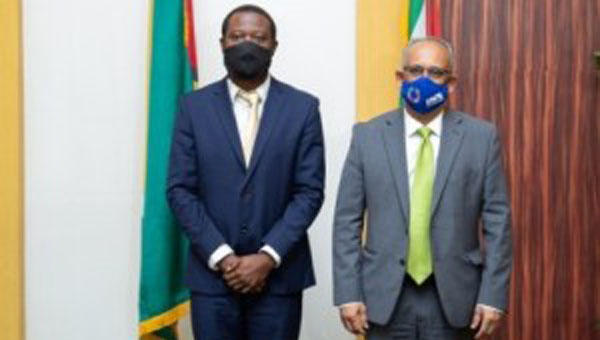 GEORGETOWN, Guyana (Friday, October 16, 2020) — Guyana and Suriname will launch a Strategic Dialogue and Co-operation Platform, next month, which is aimed at strengthening relations between the neighbours, in tangible ways.

Ramdin is part of a Surinamese Ministerial delegation that is spening three days in Guyana — October 14-16 — and includes: Minister of Public Works, Dr. Riad Nurmohamed; Minister of Public Health, Ama Ramadhin, along with technical officers and other government officials.

Minister Todd said the meeting with Ramdin was focused “on reviewing the various initiatives under the cooperation programs and proposals for the implementation of these and other initiatives, under the new strategic dialog and cooperation platform, which we will launch in Suriname next month”.

Minister Todd also highlighted that Guyana is pleased that there is already significant movement on the placement of the bridge that is to be built across the Corentyne River. With the landing sites for the bridge already located, Minister Todd said Presidents, Dr. Mohamed Irfaan Ali and Chandrikapersad Santokhi, will sign the agreement soon.

“I hope we can sustain momentum, not only on this project, but on all other agreed areas of cooperation,” he stated. “A new chapter has developed between Guyana and Suriname and I am eager to work with you to advance the goal, which we both share, to develop greater synergies in the relationship and to strengthen the cooperation of a lasting friendship.”

Meanwhile, Minister Ramdin said the sentiments are long overdue for working together, as there is no other option in fostering a peaceful relationship between neighbouring countries.

He added that the government of Suriname was “committed to strengthening the ties and seek for common goals to pursue mutually in the regional and global forum and, I believe, there is much to be done in that scope”.

During the Surinamese President’s August visit, President Ali had said they discussed co-operation on the management of the natural resources sector, local content policy in the oil and gas sector, the sharing of information on issues of security, use of technology, and joint radar surveillance of the border shared by the two countries, and other matters.