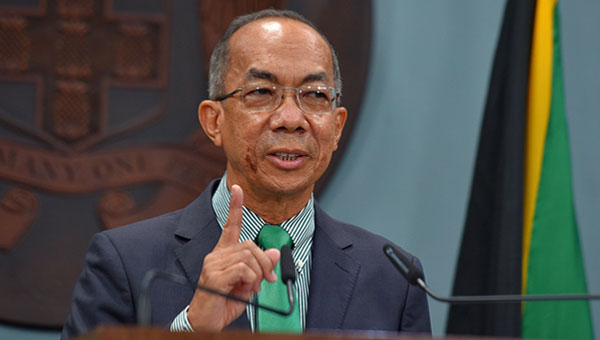 “Those are priorities and we will continue to invest in the security forces,” Dr. Chang declared, during a virtual press conference, yesterday.

He said, despite the damage to the economy caused by COVID-19, the government will not detract from doing what is necessary for the safety and security of, and all Jamaicans.

“We are unwavering in our commitment to substantial and sustained improvement in security, an unrelenting drive to eradicate corruption, and bold and decisive action to finally deal with social exclusion,” he added.

The Minister disclosed that the Ministry will be implementing transparent, evidenced-based solutions that will be monitored, consistently, in order to achieve clearly-defined and time-sensitive outcomes.

He pointed out that the government is making the necessary investments and taking the required action to achieve substantial and sustained improvement in security.

Dr. Chang related that improvements were undertaken in the Jamaica Constabulary Force (JCF), which have resulted in enhanced investigations and response times.

“We are increasing their capacity, through technology and the acquisition of modern, fit-for-purpose vehicles with direct electronic link to the police database,” he pointed out.

The Minister noted too that efforts are being made to renovate and rebuild police stations, as well as improve working conditions for members of the security forces.

He announced that 30 technology projects are in train, institutional reorganisation under way, and improved and specialised training, as well as improved telecommunications across divisions.