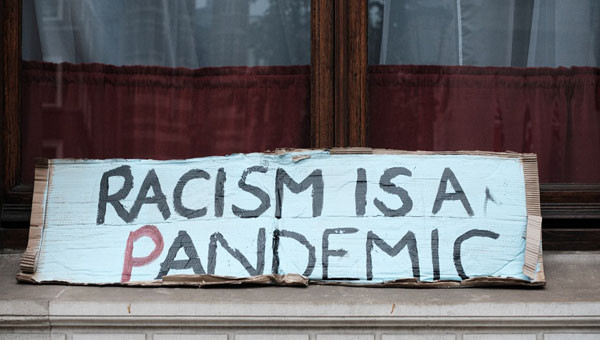 Over the last few months people, the world over, have been seriously affected by the ravages of the coronavirus and its mind-boggling detriment to the lives of everyone, regardless of culture, age, education, or financial status.

Coincidentally, along with the effects of the virus, the world has also been forced to face the truth about the Black community’s lived experiences with racism.

While we, in the Black community, are thankful to see people of all races acknowledging our life-long dilemma, it behoves us to remind everyone that, for centuries, we have been struggling under the burdens of racism — a system that has eternally claimed Black lives, a virus for which apparently there is no vaccine.

From the beginning, the world has been fully aware of the degradation of racism and that thousands of us died on the slave ships, died in cotton fields, died on coffee and sugar plantations. The list goes on. The killing of Blacks has been rampant worldwide, long before policemen started to murder our unarmed sons.

So, I believe it is time for people of conscience to admit and take action, regarding the devastating reality of racism on our lives. I also must repeat that racism is not a Black problem. We did not initiate racism and we do not perpetrate racism.

In the meantime, as long as my three law-abiding sons and two grandsons still have to get anxious, when stopped by the police, or when the acquisition of guns are made easy for our young men to kill each other, I will continue to regard racism as the Black community’s ongoing virus that destroys Black lives — not only physically, but also socially, emotionally and spiritually.

As someone, who has written anti-racist programs for more than one educational institution, I know that we can bring about positive change, in small increments, if we stop covering the seriousness of racism by establishing diversity and equity policies, which do not focus on racism.

As the saying goes: “If you don’t name it, you can’t fix it”, because any educational institution or business establishment can boast that they have diversity, as is shown by the make-up of their staff of different colors and nationalities. However, that DOES NOT show that they have a policy for dealing with rampant racist practices among their staff.

Until there is evidence of radical changes to combat racism, as it continues to be the destruction of Blacks, I must, without hesitation or apology, join my Brothers and Sisters in reminding everyone that BLACK LIVES MATTER!