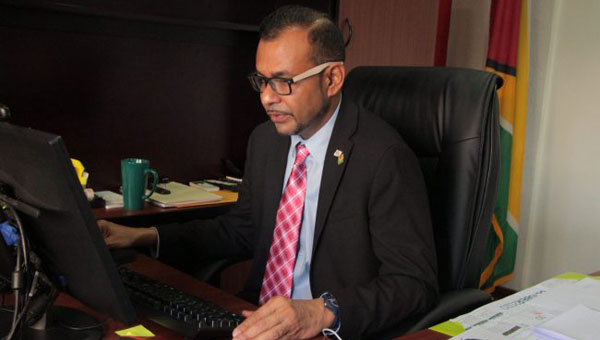 Guyana Foreign Secretary Robert Persaud addresses stakeholders from the private and public sectors, and representatives from the Center for Strategic and International Studies (CSIS), in a virtual roundtable discussion.

According to the Foreign Secretary, the report provides a comprehensive analysis of the Guyanese Diaspora, and highlights some of the perennial challenges of brain drain and high emigration rates.

“While the Diaspora is already engaged in various ways, the government recognises that a better structure is needed to serve this cherished part of our population, and to guarantee that Guyana has a fruitful and long-lasting relationship with those, who are part of our overseas community,” Foreign Secretary Persaud stated.

Further, he noted that President Dr. Mohamed Irfaan Ali, is committed to ensuring the Guyanese, living abroad, are involved and included in his vision and plans, to transform and modernise Guyana.

“As Guyana transitions into becoming the regional energy giant, the need for tangible contributions from Guyanese, both here and abroad, will be one of the key ingredients to enable a Guyana for all,” the Foreign Secretary said.

The Ministry of Foreign Affairs and International Cooperation has fortified its engagement with the Guyanese community overseas, through the reintegration of the Diaspora Office, to allow for structured engagement, aimed at strengthening relations and dialogue to foster national development.

The Office has also begun to engage international partners, such as the International Organization of Migration (IOM), to develop projects and initiatives, aimed at furthering Diaspora engagement.

The government, in collaboration with the IOM, is currently engaged in the process of finalising a national Guyana Diaspora Engagement Strategy and Plan of Action, before it is launched and implemented in the coming months.

The strategy will also include a well-functioning structure for remigration.