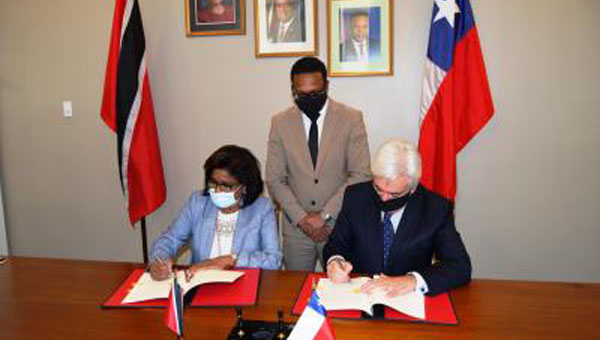 PORT OF SPAIN, Trinidad and Tobago (Friday, October 23, 2020) — Senator, Paula Gopee-Scoon, Minister of Trade and Industry, on Tuesday, signed the General Framework Agreement for commencement of negotiations of a Partial Scope Trade Agreement, between Trinidad and Tobago and Chile, in a ceremony at the Ministry of Foreign and CARICOM Affairs.

The signing represents a significant milestone in events that begun in 2016 and will culminate in a new trading relationship between both countries.

Minister Gopee-Scoon, in her address, noted that the occasion signals the commitment to strengthening bilateral ties, between the governments of Trinidad and Tobago and Chile.

“Imports of selected inputs into manufacturing and consumer goods will have reduced duty. This Agreement will also seek to eliminate non-tariff barriers and foster cooperation between the countries in mutual areas of interest, including trade facilitation and electronic trade.”

The Trade Minister indicated that the completion of negotiations, and the eventual implementation of the Agreement, will fulfill one of the key objectives identified in the Trinidad and Tobago Trade Policy 2019-2023, namely to increase market access and penetration for exports and meet the goal of growing market share within traditional and non-traditional markets.

She added, “With this arrangement, Trinidad and Tobago aims to diversify exports to the Chilean market, which have primarily been dominated by energy products, and also to increase export values.

“Trinidad and Tobago and Chile share a strong trading relationship, with the trade balance traditionally favoring Trinidad and Tobago. This is evidenced by the fact that over the last five years, Trinidad and Tobago exported, on average, TT$ 2.1 billion worth of goods per year to Chile, with annual imports averaging approximately TT$ 144 million dollars.”

Negotiations are expected to commence, before the end of 2020.

Senator, Dr. Amery Browne, Minister of Foreign and CARICOM Affairs, stated that the signing of the framework agreement is testimony of the unwavering commitment of both countries to deepening, widening and enhancing our bilateral relationship.

Minister Browne expressed gratitude to the Chilean government for its commitment and contribution to ensuring fruition of this important initiative.

Juan Aníbal Barría, Ambassador of Chile, in his remarks, said, “As Trinidad and Tobago faces a relevant challenge, such as how to diversify its export offering and energy matrix, Chile is willing, and available, to contribute and cooperate with you in these areas.”

He added that the signing was a first, but very relevant, step as it means the beginning of a formal and concrete process that Chile and Trinidad and Tobago takes seriously and responsibly.