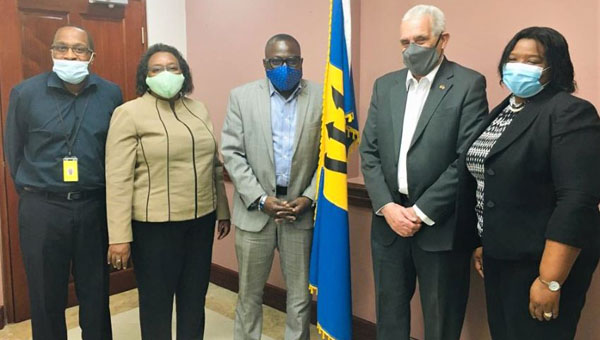 BRIDGETOWN, Barbados (Friday, October 30, 2020) — Since 1972, Barbados has had an exceptional relationship with Cuba, and the government is seeking to strengthen this relationship in the area of sports.

The ‘pushing of new frontiers’ in sports was one of the main areas discussed, during a courtesy call, on Wednesday, between Minister of Youth, Sports and Community Empowerment, Dwight Sutherland, and Cuban Ambassador to Barbados, Sergio Jorge Pastrana.

Minister Sutherland — in acknowledging the long-standing bilateral relationship in areas, such as culture, health, education and sports — noted that the cooperation between the two countries, in eight sporting disciplines, could be further developed, and highlighted cricket and road tennis as two disciplines for future cooperation as well as scholarships.

He also stressed that sport is one of the pillars that the government intends to utilise to develop the youth in Barbados, and to emphasise the role it can play in youth development, he quoted Nelson Mandela: “Sport has the power to change the world; it has the power to inspire; it has the power to unite people in a way that little else does. It speaks to youth in a language they understand.”

Agreeing with the quote, Ambassador Pastrana stated: “Sport is one of the main elements we have to develop the youth….Sport can bring higher gains, in terms of principles, personal development and building character.”

Ambassador Pastrana assured Minister Sutherland of Cuba’s commitment to its relationship with Barbados, and extended an invitation to Minister Sutherland to visit Cuba’s University of Sports, especially its biomechanics division, and its psychology sports lab.

The Ambassador also gave the assurance that the coaching program, which has been one of the longest lasting initiatives between Barbados and Cuba, would continue.