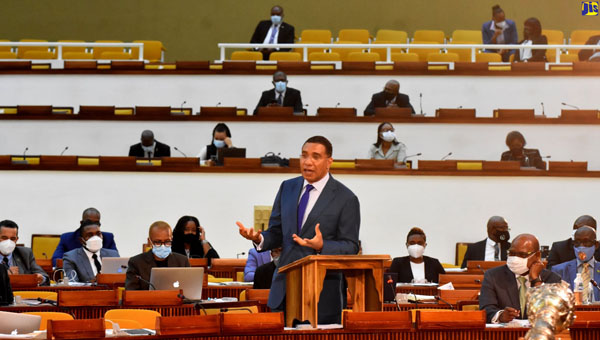 Jamaica's Prime Minister, Andrew Holness, makes a point, during an address in the House of Representatives, on Tuesday. Photo credit: Mark Bell/JIS.

KINGSTON, Jamaica (Friday, October 30, 2020) — Prime Minister, Andrew Holness, informed Jamaicans that the preliminary estimate for the damage, caused by the heavy rains that lashed the island recently, is close to $2 billion.

“The estimate for flood damage, included in the report that has been presented by the National Works Agency (NWA), is preliminary, as the agency is unable to access all points in the field, in order to comprehensively assess the extent of the damage to infrastructure and the cost of permanent repairs,” the Prime Minister announced.

Holness, who was making a statement in the House of Representatives, on Tuesday, noted that, based on “what I have been seeing and what has been reported”, the estimate will rise, significantly.

“This covers road clearance, drain cleaning, creating access and patching, but it does not include the cost of permanent repairs or major rehabilitation,” he pointed out.

The Prime Minister noted that the estimated cost would only cover what would be needed, for example, to clear the Bog Walk gorge or the roadways that have been made impassable; to clear certain landslides and land slippages; to patch certain roads, to allow for the smooth flow of traffic; and to undertake the clearing of drains and gullies.

He said that, in addition to the impact on the roads maintained by the NWA, there has been significant damage to parochial roads; and elaborated that 60 percent of parochial roads were affected, with Kingston and St. Andrew, St. Catherine, Clarendon and Manchester being those most greatly affected.

“The estimate is being finalised, but preliminary indications are that the damage to parochial roads and drain networks will run in excess of $700 million,” the Prime Minister related.

He said that, based on the extent of damage, and the cost, all the required works cannot be immediately done and, accordingly, the government is proposing a program of targeted interventions with priority rankings.

“[The] first priority would be to reopen blocked roads, the cleaning of critical drains, which are now heavily silted, and then patching of main thoroughfares,” he said, adding that he is now planning an island-wide tour to get a first-hand view of the extent of the damage.