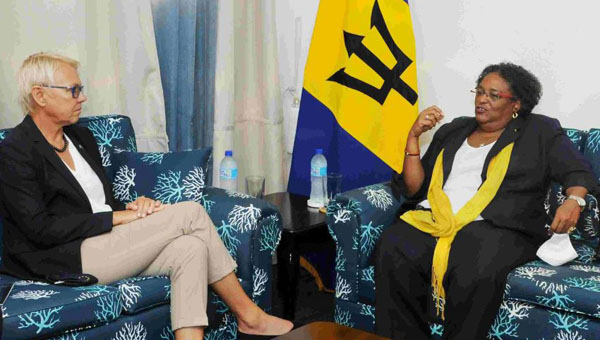 Barbados' Prime Minister, Mia Amor Mottley, making a point to the new Ambassador of the European Union, Malgorzata Wasilewska, during a courtesy call at the Wildey Gymnasium. Photo credit: B. Hinds/BGIS.

BRIDGETOWN, Barbados (Wednesday, December 2, 2020) — Prime Minister, Mia Amor Mottley, has again expressed concern with the European Union’s blacklisting of Barbados, and added that she is prepared to travel to Europe and meet with high-level officials to deal with the matter.

Mottley made the comments recently, when the new Ambassador of the European Union, Malgorzata Wasilewska, paid her a courtesy call, at the Wildey Gymnasium.

She remarked that the blacklisting issue was one of her biggest headaches, as she highlighted how hard Barbados has worked to bring the economy back on track, and improve its various systems.

“This situation is wrong, and is now having consequences for day-to-day living,” she stated, as she outlined how the blacklisting has affected the island nation.

The Prime Minister said it was necessary to settle this matter, so the EU and Barbados could work together on other critical issues, such as the climate crisis, data privacy, and human rights.

During the wide-ranging discussion, the Prime Minister, who is co-Chairing the One Health Global Leaders Group on Antimicrobial Resistance (AMR), spoke extensively on AMR, including what it means for Barbados and the Caribbean to be a part of the leadership grouping.

She also discussed how the EU could help to continue the far-reaching body of research that has started in this area.

For her part, Ambassador Wasilewska said it was important for Barbados and the EU to map out what needs to be done, as she emphasised the critical nature of partnership.