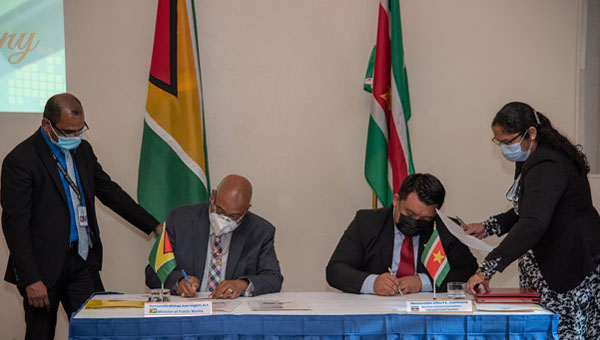 GEORGETOWN, Guyana (Tuesday, December 8, 2020) — Guyana is collaborating with Suriname to broaden connectivity and tap into both new and existing markets, with the inking of an Open Skies Agreement.

Minister of Public Works, Bishop Juan Edghill, and Surinamese Minister of Transport, Communication and Tourism, Albert Jubithana, signed the agreement, drafted over a span of seven days, at the Pegasus Hotel, on Monday.

In his remarks, Minister Edghill said, “We have agreed to remove all restrictions on market access, capacity and pricing to create a more open market and to give route rights for our respective airlines.”

The agreement supplements the existing CARICOM Multilateral Air Services Agreement, by removing obstacles to further promote trade, growth of the tourism sector and the unrestricted movement of people.

“We are signing this bilateral agreement to continue reciprocal exchange of traffic rights, but under an obligatory legal framework, and not discretionary. This will give airlines more confidence and assurance in investing in the transport sector,” Edghill added.

He further, outlined the opportunities the agreement presents for air travel, saying Guyana will become better positioned as a hub, as it taps into Suriname’s connection to Europe and the Dutch Caribbean.

“The ultimate beneficiary of this agreement is our people – our people being able to travel with ease and in a cost-effective manner,”  he observed.

Echoing Minister Edghill’s assertions, Minister Jubithana said increased travel will open new doors, as there will be more avenues for cultural exchanges between the two countries.

“I believe that the economic benefits aside, it will reunite friends and families. We will foster a better relationship between our two nations because more Surinamese people will have the opportunity to see the wonders of Guyana and more Guyanese will experience the Surinamese hospitality,”  he intoned.

Minister within the Ministry of Public Works, Deodat Indar; Director-General of the Guyana Civil Aviation Authority, Lt. Col. (ret’d) Egbert Field; and other government officials and Heads of agencies, from both nations, were also in attendance.