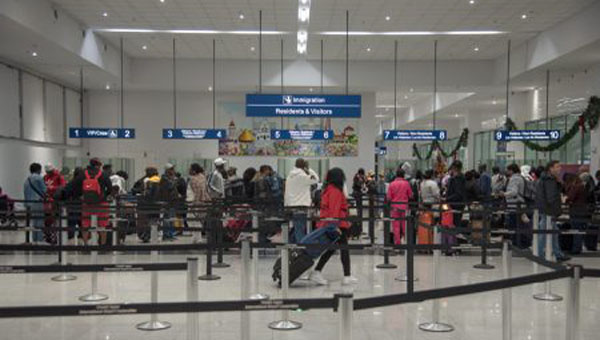 Passengers line-up at the immigration terminals in the arrivals' lounge, at the Cheddi Jagan International Airport. Photo credit: DPI.

GEORGETOWN, Guyana (Wednesday, December 23, 2020) — The China Harbour Engineering Company (CHEC) has agreed to undertake additional work on the Cheddi Jagan International Airport, to the tune of $1.8 billion — at no additional cost to the Guyana government.

The Ministry of Public Works announced, in a statement, that the government and CHEC entered into an agreement, yesterday. The deadline for the work to be completed is December 31, 2021.

President, Dr. Mohamed Irfaan Ali, had said he was “disappointed” with the current scope of works at the airport, and shared these views with Chinese Ambassador to Guyana, Cui Jianchun, and representatives of CHEC, after inspecting the project in September.

He explained at the time that the government would only accept the work, outlined in the original contract for the expansion of the airport.

The airport expansion contract was signed in 2013 to the value of $30 billion (US$150 million). The deadline for the project was 2015, but the company was given an extension to complete the project, which expired in 2018.

The project remains incomplete in 2020, even after an additional extension was granted.