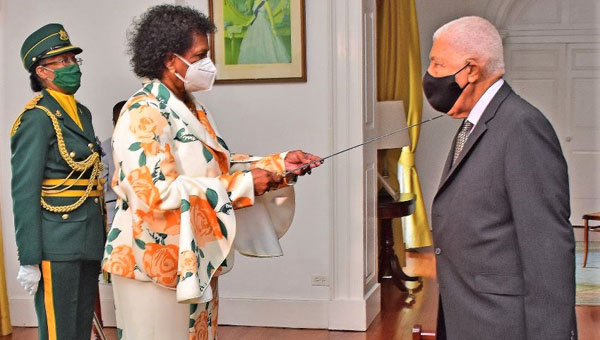 Brigadier General, Rudyard E. C. Lewis, is knighted by Governor-General, Dame Sandra Mason, at Government House yesterday. He received the Knight of St. Andrew for his extraordinary achievement and meritorious service to the military in Barbados. Photo credit: C. Pitt/BGIS.

BRIDGETOWN, Barbados (Wednesday, December 23, 2020) — Governor-General Dame Sandra Mason extended congratulations, and expressed thanks to four gentlemen for their service to Barbados, as they received their National Independence Honours and Awards, yesterday.

Sir Brigadier General Rudyard E. C. Lewis was knighted by the Governor-General. He received the Knight of St. Andrew for his extraordinary achievement and meritorious service to the military in Barbados.

Sir Rudyard, a former Chief of Staff of the Barbados Defence Force, who served for some 67 years, stated: “I am truly honoured and I’m very glad that Barbados feels that I should have gotten knighted, really honoured.”

Receiving the Companion of Honour was O’Brien Trotman, for his service in politics and contribution to the trade union movement.

“It’s an honour to receive this award, and one is humbled by these occasions.  One never expects these things, but we uphold the fact that we have served, that’s what’s important, that we did service,” Trotman shared.

Dame Sandra presented the Barbados Bravery Medal insignia to Glenroy Hackett, for his efforts in saving the life of a young St. Lucian female student, who was studying at the UWI, Cave Hill Campus.

Hackett, a beach ranger for 37 years, recounted the event, which took place at Mendoza Beach, and revealed that over the years, he had saved six persons.

“It’s a real joy to receive an award like this, honestly.  It shows that doing good things, you get good rewards, and I thank God for this day.  I really appreciate it that I was recognised for doing something outstanding for my country,” he said.

The 2019 Barbados Service Star was presented to Dr. Edmund DaCosta Blades, who received his award for his service to Public Health as a microbiologist, and, in particular, his contribution to research on the Sahara dust.

Dr. Blades said, “I’m honoured to be able to receive such an award…. It’s one of those things that I never expected [and] I gave God all the thanks and praise for his goodness to me.”