New in Pride
Home / Sports / Punch Like A Muslim Woman: An Egyptian-Danish Boxer Breaking Many Stereotypes 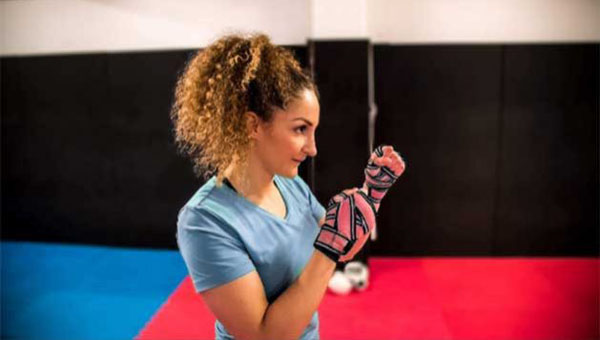 NEW DELHI, India (January 27, 2021) IPS — As a Muslim woman, born and brought up in Denmark, Nadia Helmy Ahmed broke many stereotypes, when she started boxing at the age of 15.

“Back then, it was not common for girls to take up elite boxing, let alone common for Muslim girls. I used to be the only girl in my gym, along with 10 others — boys,” commented Nadia to IPS News.

Elite boxing is defined by who the boxers fight, how they fight, and how they handle top-ranked competition on a consistent basis. Nadia has been an elite boxer for over 15 years, and is one of only 10 Danish women in the sport, representing Denmark in world championships.

“Being a girl in a male-dominated sport, means that you have to learn to deal with all the obstacles that come with it; sometimes you are treated differently, both from inside the community of the sport and outside from the Muslim community as well. Sometimes the tone in the gym can be a bit harsh, but I quickly learnt to turn that direct language into positive fuel.

“Boxing happened by chance in my life, and I fell in love with the sport and it has stayed on with me. I am lucky to say my family has always been very supportive, and that’s why I have been able to pursue my passion,” noted Nadia.

As a boxer, Nadia continues to challenge various gender stereotypes and cultural discourses.

She says, “By living my life the way that I have chosen to live, I have challenged many norms and expectations of what a Muslim woman should look like, what she should do, what her goals and ambitions should be. I have chosen another way for myself, a different path and I feel at home when I am training.”

Nadia is part Egyptian and part Danish and she says she no longer wants to be caught between the discourse of identity and nationality, between her parents’ countries of origin, and her own country of residence.

Denmark is home to almost 320,000 Muslims, which is about 5.5 percent of the population, putting the country in a slightly higher proportion than in the rest of Europe.

According to a report, published in Reuters, a growing number of Danish Muslims say that they have faced verbal abuse, exclusion and hate crimes, since mainstream political parties began adopting anti-immigrant policies. Immigration in Denmark has become a strong issue, especially during elections.

In December 2020, Denmark’s government decided to separately classify people, from or with heritage in primarily Muslim countries and regions, in their official crime statistics — a move, which was deeply criticized by many.

Immigration and Integration Minister, Mattias Tesfaye, supported the differentiation of people in Denmark with Middle Eastern and North African heritage.

“Pluralism is based on trust, and the recognition between people, whether they want it or not, said Nadia.

“Religion plays an important role in cultural encounters, partly because it highlights differences and opens up new understandings of plurality and community. We as Muslim women have to use our understanding of liberal European politics to protest against the exclusion of immigrants from the public sphere.”

“I crave to find a stance of cultural dignity, to find a moral community of mutual acceptance and purpose. The crucial issue for us has been to achieve a status, which is legitimate and acceptable, to be both Muslim woman and Danish at the same time,” added Nadia.

Over the past few years, Nadia has taken her passion for boxing to Muslim girls in local communities, living in Braband in Gellerup, an area of western Aarhus, which holds the biggest housing associations in Denmark.

She encourages women to empower themselves, by teaching them how to tap in and use their physical and mental strengths.

“When I started coaching young girls from the community, I wanted to transfer my passion for boxing to them. My mission was to enable them, to empower them, to give them a space, where they could be themselves, at the same time, have fun using their bodies to do so,” Nadia disclosed.

“Boxing is a way of life. The combination of the mind and the body in sports gives a smaller picture of life in itself. When you think you can’t give anymore, there is always a little more to give in sports. Without individual strength and power, it is impossible to fight for your rights, for a better society,” advised Nadia.

Integration remains a debate and challenge for those who come to Denmark, especially from Muslim countries. Human Rights organizations have reported numerous violations against refugees, immigrants and asylum seekers and have often described Danish policies towards immigrants, as some of the most aggressive in the western world.

In the current climate, where European countries have been opening their doors towards immigrants and refugees, it is important for Denmark to re-think it’s value-based policies, which has become one of the biggest reasons for countries’ polarizations, especially towards its immigrants, religion, identity and culture.

According to Nadia, the way forward for Denmark is to identify the challenge of integration, without politicization, and interpret differences and similarities in real contexts, defining common goals and interests.

Sania Farooqui is a journalist and filmmaker, based out of New Delhi. She hosts a weekly online show, called The Sania Farooqui Show, where Muslim women, from around the world, are invited to share their views.