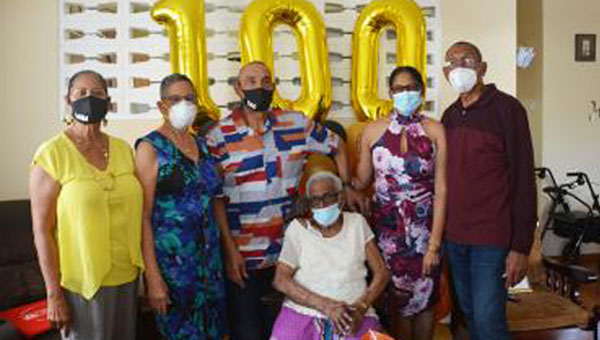 PORT-OF-SPAIN, Trinidad and Tobago (Thursday, January 28, 2021) — COVID-19 may have dampened many celebrations, locally and worldwide, but it did not inhibit the spirit of Christina Crichlow, who celebrated her 100th birthday, yesterday.

To celebrate the milestone, her children hosted a small celebration, themed “Aged to Perfection”, at her Beccles Street, home in Tacarigua, where attendees included relatives from Trinidad and also her children in Canada and North America, who joined via Zoom.

Also celebrating Crichlow’ s milestone birthday was Minister of Social Development and Family Services, Senator Donna Cox, who’s first question to Crichlow was: “What is the secret to your longevity?” 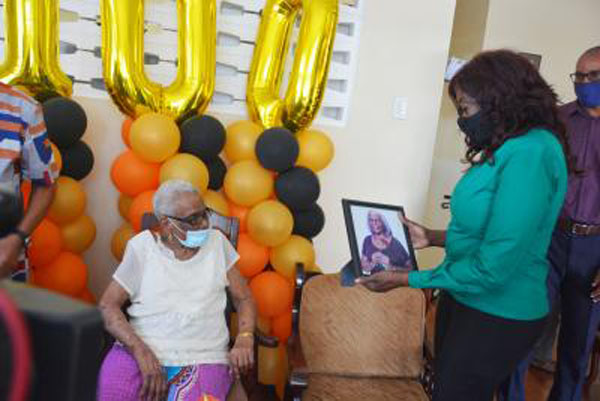 Senator Donna Cox, Minister of Social Development and Family Services, presented Crichlow with a Certificate of Honour and Achievement and other items, on behalfof the Trinidad and Tobago government.

In a hearty response, the new centenarian imparted some words of wisdom to Minister Cox: “I pray, hard work, I go to church and I live an ordinary life.”

She indicated that she is very happy to have reached the age of 100, stating, “When I reached to 95, I asked if it is possible, if it pleases Him that He will let me live to be a centenarian.”  Well it surely was God’s favour that enabled her to attain the prestigious and graceful age of 100. 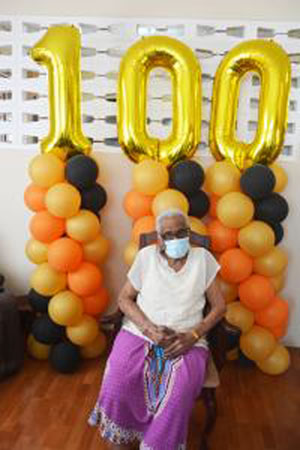 “You are blessed to live to see one hundred,” intoned Minister Cox, who presented Crichlow with a Certificate of Honour and Achievement, an orchid plant, which represents elegance, reverence, beauty and strength; and other items, on behalf of the government of Trinidad and Tobago and the Ministry’s Division of Ageing.

Brenda Crichlow-Cox, one of Crichlow’s 15 children, said her mother is capable of doing things for herself and still cooks, occasionally.

Minister Cox commented that the recognition of seniors, which falls under the purview of the Ministry’s Division of Ageing, is aimed at recognizing and paying tribute to older persons.

The Family Services Minister added that the recognition also serves as a demonstration of the Ministry’s commitment to promoting and preserving the well-being of older persons and fostering a participatory approach, by involving the community to recognise and appreciate their elders.

She also indicated that she has particular interest in older persons, as they were a segment of vulnerable groups in the society that deserves special attention and support in every way possible.

Christina Crichlow was born on January 27, 1921. She has 15 children, 38 grandchildren, 44 great-grandchildren and two great-great-grandchildren. She grew up doing home gardening and is very skilful with her hands, sewing work clothes for nurses, knitting, and even having presented her handicraft pieces to the late Dr. Eric Williams, during the opening of the first Tacarigua Community Centre.