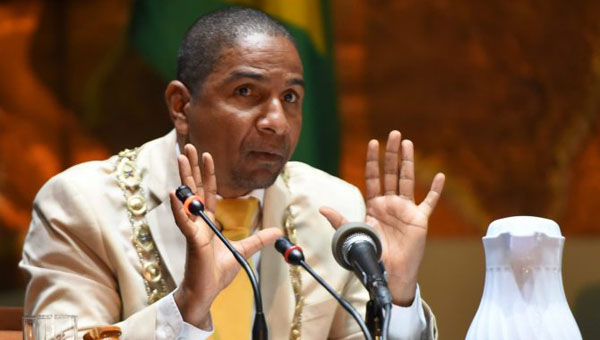 The presentation of the Keys to the City of Kingston is the highest honour that can be bestowed by the KSAMC.

Moving the resolution for Hibbert during the sitting of the Corporation, at the Jamaica Conference Centre in downtown Kingston, Councillor for the Chancery Hall Division, Duane Smith, hailed the musical Ambassador for the immeasurable contributions he made to positively impact the country’s music and culture.

Hibbert, who was a legendary reggae singer and songwriter, recorded numerous hits and is internationally recognised as a trailblazer, who popularised reggae music globally.

“Let us continue to build on his legacy and the legacy of others for the preservation of our culture,” Smith said.

He encouraged Jamaicans to visit the Water Lane mural in downtown Kingston, which was created in honour of Hibbert.

“The art not only captures the persona and the charisma of Toots, but encompasses his hits, spanning decades, and chronicles his journey of reggae music,” he said.

The Resolution stated that the City of Kingston is the birthplace of reggae music, which has emerged as a world-renowned art form, largely made popular by the talents, efforts and creativity of Hibbert.

For his part, Councillor of the Molynes Gardens Division, Patrick Roberts, said it is most fitting that the recognition is being done during Reggae Month, to recognise the musician, who acquired more than 31 hit songs.

“Although he was born in Clarendon, he reaped all his success in the city of Kingston,” Roberts said.

Hibbert died at the University Hospital of the West Indies in St. Andrew on September 11, 2020, at the age of 77, after a period of illness. His group, Toots and the Maytals, which was formed in the 1960s, was pivotal in birthing, shaping and popularising reggae music.

Meanwhile, in moving the Resolution for Stewart, Councillor for the Norbrook Division, Suzan Senior, said the business mogul made a sterling contribution to the country, the Caribbean and the world.

“This man was not a selfish man, he had a vision for his country,” he said.

Councillor for the Papine Divison, Venesha Phillips, described Stewart as a giant in thought, dream and action.

Stewart died on January 4, 2021 at age 79. He was the founder, owner and chairman of Sandals Resorts, Beaches Resorts, and their parent company, Sandals Resorts International, as well as The ATL Group and its subsidiaries Appliance Traders and The Jamaica Observer.

The hotelier and businessman impacted local and regional tourism, continued significantly to brand Jamaica through his involvement in tourism, his leadership of Air Jamaica, and his contribution to business and the economy.