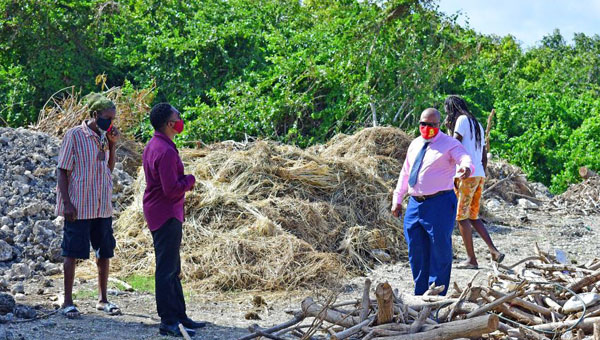 Rastafarian Groups In Barbados Playing A Role In Food Security

ST. JOHN, Barbados (Tuesday, March 16, 2021) — A large, overgrown area of land at Bath, St. John, will soon be fully transformed into agricultural production, with the help of the Rastafarian community, allowing them to play a lead role in the nation’s thrust towards food security.

Minister of Agriculture and Food Security, Indar Weir, revealed this, yesterday, during a tour of the area, with Minister in the Ministry, Peter Phillips; Permanent Secretary, Terry Bascombe; and officials of the Barbados Agricultural Management Company (BAMC), Soil Conservation Unit and media representatives.

Speaking to the media, the Agriculture Minister noted that having cleared away much of the bush, including huge amounts of river tamarind, his Ministry was now ready to make provision for the Rastafarian community, whose members had also started their own preparations.

“In total, there should be 100 acres.  We intend to clear another area and cultivate it.  Then, we are going to run from here, all the way down to where farmers are already doing agricultural production. All in all, I am hoping that we can grow enough here,” Agriculture Minister Weir stated.

He also pointed out that a vending site would be created, and his Ministry would be undertaking a restoration program, by the chimney at Bath, that would include a cafeteria, where visitors to the area could enjoy natural juices and the Ital or healthy food, for which Rastafarians are known.

Weir said that the Ministry had already started the process, to present the project to Cabinet, in order to gain funding to carry out the program, and added: “When we are finished, Bath will be a green spot, a total agricultural production. We have to help the Rastafarian community.  So, what we are doing for them is, we are providing the land at a very favourable lease rate. We are also providing them with the inputs for the crops; we are going to provide them support, with water.”

On the issue of water, the Agriculture Minister stressed that it could include going the way of a full dam, or tapping into the spring there, and pulling water, but the component would be supplied to the farmers, especially in the dry season, so that they could have access to a continuous supply of water.

Queried about some of the crops the Rastafarian groups were contemplating, Minister Weir said they were looking mainly at tree crops, such as coconut, and medicinal plants, like Aloe Vera.

Other deliverables of the Bath project will include bathroom and storage facilities, as well as some kiosks for residents of St. John and surrounding districts to visit and purchase fresh fruit and vegetables.

The cultivation component of the project is being handled by the BAMC, while the clearing of the area was undertaken by the Soil Conservation Unit.

Commending staff of these entities, as well as his Ministry, for their cooperation and work, Minister Weir said: “So, overall, we are actually placing part of our food security program into the Rastafarian community in Barbados, so that they can participate in helping us reach our objective, in terms of food and nutrition security in Barbados.”