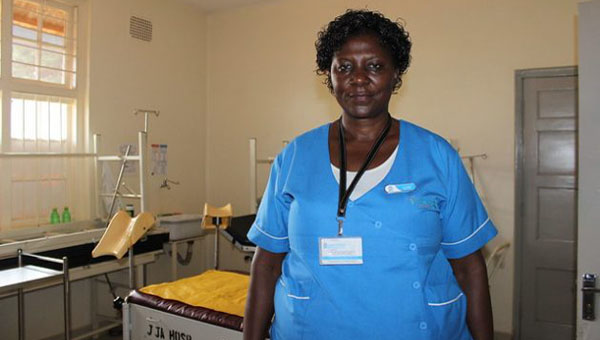 Catherine, a nurse at Jinja referral hospital in Uganda. During the height of the COVID-19 pandemic, caseworkers — the majority of whom are women — attended work daily. The 65th session of the UN Commission on the Status of Women (CSW) is currently being held. This year’s them is "women's full and effective participation and decision-making in public life, as well as the elimination of violence, for achieving gender equality and the empowerment of all women and girls". Photo credit: Lyndal Rowlands/IPS.

BONN, Germany (Thursday, March 18, 2021) IPS — During the height of the COVID-19 lockdowns, while many sought safety being at home, women in the healthcare, child care, aged care, teaching and services fields — who hold the majority of jobs in those occupations — went to work, every day.

“The tragedy was, those workers, on whom we depend most, the fabric of society, are actually amongst the lowest paid,” said Sharan Burrow, General Secretary of the International Trade Union Confederation.

She was speaking, during a side event to the 65th session of the United Nations Commission on the Status of Women (CSW) that is currently taking place from March15 to 26.

The year’s commission theme is ‘Women’s full and effective participation and decision-making in public life, as well as the elimination of violence, for achieving gender equality and the empowerment of all women and girls’.

The coalition is one of six themed coalitions that exist within Generation Equality, a UN Women campaign that promotes gender-equality.

The high-level side event is aimed to discuss women’s participation and decision-making in economic life. Globally, women present the majority of the working poor, with less than half of women of working age in paid employment.

Germany’s Federal Minister of Economic Cooperation and Development, Dr. Gerd Müller, said the quest for economic justice and equal rights was made even more difficult by COVID-19, which brought existing inequalities into sharp focus.

He noted that women and girls in Africa, Asia and Latin America were particularly hard hit.

“Even before the COVID-19 pandemic, women and girls enjoyed fewer rights, had less access to education and resources, and often lived and worked under appalling conditions. And now they are being hit by the fallout from the pandemic, the lockdown and the economic decline.

“Typically women were often the first to lose their jobs. Many girls will never return to school, because they have to work in cottage industries, in order to help support their impoverished families, or because they have an unplanned pregnancy or have been married off,” Müller elaborated, adding that violence against women and girls had also increased, worldwide. He called this a disaster and tragedy. 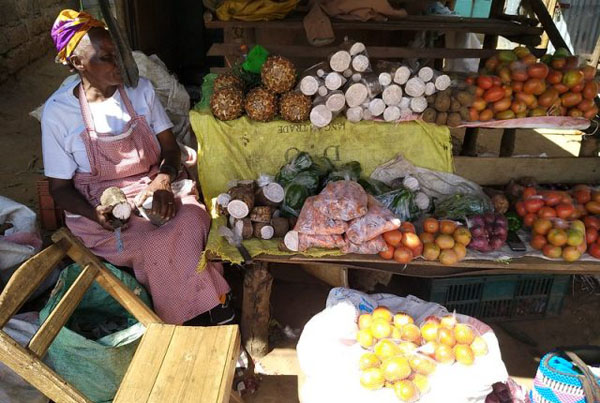 A woman farmer selling her produce at a local market in Casamence, southern Senegal. In sub-Saharan Africa, 90 percent of those in informal employment, which is typically low-skilled with poor working conditions, are women. A UN high-level side event aimed to discuss gender equality, women’s participation and decision-making in economic life. Photo credit: Stella Paul/IPS.

Phumzile Mlambo-Ngcuka, Executive Director of UN Women, acknowledged that violence against women, which she called ‘a shadow pandemic’, had increased.

“What are we going to do to assist women make a re-entry to the labour force ,as well as address the economic fallout that they will experience?” she asked.

Mlambo-Ngcuka said there was also a skills-gap to address, as women were affected by the gender digital gap, they would not likely qualify for the new jobs that were likely to be created post-pandemic.

She also noted that women were carrying the burden of unpaid work at home, which required them to be at home and give up work.

She said a number of obstacles had emerged from the pandemic that affected the sustainability of women in the labour force.

Burrow said women were at “the forefront of every aspect of a labour market that is broken”.

“Are governments, are employers serious about rectifying the inequality of income, gender and race? If we are, then we need jobs, jobs and jobs, because women have fallen out of the labour market and fallen into precarious work,” Burrow added.

She said because governments failed to regulate the labour market, 60 percent of workers worked in the informal market — the majority of whom were women.

These women, she said, had no rights, no minimum wage and their work conditions were not subject to compliance.

“So [they are] absolutely at the forefront of survival every day. And then you have 40 percent of workers in the formal economy; but a third of those are in precarious or in insecure work. Again, the majority are women,” Burrow observed.

Women are also most likely to be in low-paying, insecure and informal work and earned, on average, in developed economies, 20 percent less than men. In developing economies, the gap is believed to greater. Women are also highly represented in the sectors that are hard hit by the COVID-19 pandemic.

“Twenty-five years later, we have still not been able to implement it fully, but it is still important for us to do our best to implement it,” Mlambo-Ngcuka said.

“As we have not achieved everything that we wanted to achieve in the Beijing Declaration, we are therefore, at that stage, where we have to review how far we have come, and Generation Equality is borne out of a realisation that we have a long way to go.

“We have also realised that the implementation of the SDGs have not moved, as far and as fast, as we wanted it,” Mlambo-Ngcuka explained.

She said the Action Coalition on Economic Justice and Rights was an action-orientated coalition “with very concrete actions that we are going to take”.

“We will look at gender-based violence, including sexual violence in the workplace, and we are also going to be asking member states to ratify the ILO [International Labour Organisation] convention on sexual harassment and violence in the work place,” she pointed out, adding that they were looking at closing the gender pay gap, as well as looking at the need for women to have protected and decent jobs.

She said in the event of another pandemic, “we should not find ourselves in this situation again, where there is a bloodbath of jobs that are occupied by women, because they are unprotected and women have no benefits”. She said they also wanted to eliminate the $1.5 trillion credit gap that affects women.

Diane Ndarbawa, President of Manki Maroua, an association of girl-child mothers, from northern Cameroon, spoke about the constraints that women in rural areas face in accessing economic opportunities.

She said that in Central Africa, and Cameroon in particular, there were several constraints that resulted in the low rate of participation by women in economic decisions, often relegating them to second place, when it came to economic decision-making.

Some of these constraints included: a lack of information on laws, policies and programs, related to economic opportunities; a lack of control over the required documentation (particularly the drafting of project and activity reports); poor computer and digital technology skills; and the misinterpretation of traditions and religions; among others.

“As a young woman, there are additional constraints. In my region, where there is violence and insecurity linked to extremism and traditions, young women limit themselves to small craft businesses,” she said.

She said the establishment of Generation Equality Action Coalitions would improve the participation of young women in economic activities in sub-Saharan Africa’s rural areas, particularly in Cameroon’s extreme north. Far North Cameroon has been caught in the midst of a Boko Haram insurgency in the Lake Chad Basin.

“Our participation in this multi-stakeholder process, gives young women and associations the strength to contribute and influence decision-making bodies, at all levels,” she said.

“It would be important to advance the rights of young women and girls, by involving, by raising awareness with the population, more specially, parents, religious leaders, local leaders, showing them the importance of the empowerment of young women,” Ndarbawa said.

Meanwhile, Müller said Germany had stepped up support for action to empower women and girls and the work of the UN. He said Germany had allocated €38 million in additional funding to help promote gender-equality, during the current pandemic.

“If we are serious about our desire to recover better together, we will need women and girls, who are empowered and, therefore, strong — now more than ever,” Müller said.