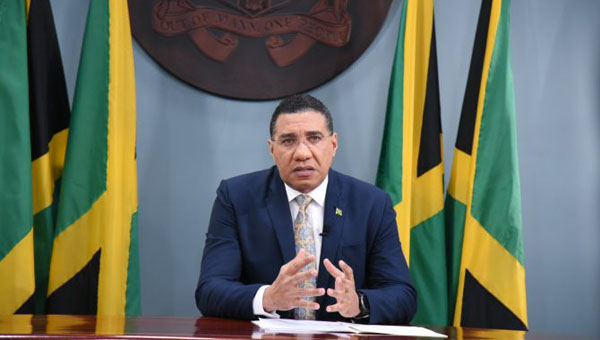 KINGSTON, Jamaica (Tuesday, March 30, 2021) — Prime Minister, Andrew Holness, is calling for an extension of the Debt Service Suspension Initiative (DSSI) of the Group of 20 (G-20), to further aid in the economic recovery of developing countries from the coronavirus (COVID-19) pandemic.

Holness noted, that while he appreciates that the initiative has been extended until June 2021, he is suggesting a further extension to next year, highlighting the fact that debt servicing for developing countries “has come at tremendous socio-economic costs to our population, which have borne the burden of steep cuts in public expenditures”.

The Prime Minister, who was addressing a virtual High-Level Meeting with Heads of State and Government on the International Debt Architecture and Liquidity, yesterday, stressed that consideration should also be given to the G-20 expanding its beneficiaries, to include highly-indebted, middle-income countries.

The meeting, which Prime Minister Holness co-convened with United Nations Secretary-General, António Guterres, and Prime Minister of Canada, Justin Trudeau, is part of the Financing for Development in the Era of COVID-19 and Beyond Initiative, which seeks to mobilise action to assist the economic recovery from the pandemic.

The G-20 is an international group of Finance Ministers and Central Bank Governors from 19 of the world’s largest economies, including those of developing nations, along with the European Union.

Formed in 1999, the G-20 has the mandate to promote global economic growth, international trade, and regulation of financial markets.

Holness noted, as well, that private creditors represent an increasingly large share of the overall creditor composition of developing countries and should be actively pursued and engaged to participate in the DSSI on equal terms.

“However, we need to bring the credit rating agencies into our discussions, as many countries are afraid to apply for debt relief because of the threat of ratings downgrade,” he said.

The Prime Minister further suggested that a special framework, applicable only to this extraordinary period, “is more than worthy of their contemplation, given the larger medium-term cumulative benefit of more countries achieving earlier recovery with sustainable debt arrangements”.

He pointed out that the utilisation of innovative financial instruments, such as debt swaps, contingent debt instruments, and the creation of specialised liquidity funds can also play an important role in ameliorating the debt and liquidity challenges of developing countries.

“In this respect, we support the proposal by the Economic Commission for Latin America and the Caribbean (ECLAC) to address the liquidity needs of Caribbean countries, through the creation of a Caribbean Resilience Fund. It has also proposed a debt for climate adaptation swap facility,” he said.

Also of interest, the Prime Minister said, is Costa Rica’s proposal for the creation of an extraordinary support fund to alleviate the effects of the COVID-19 economic impact.

The fund will be geared towards addressing the impacts of COVID-19 and the fiscal space of countries and assist them in fulfilling their external debt obligations.

“These initiatives merit serious consideration, especially for Caribbean Island Developing States, given our vulnerability to climate change and dependence on external capital flows from tourism and remittances,” Mr. Holness said.

The Prime Minister said he is also encouraged by the view of the United States (US) Treasury Secretary that a new allocation of Special Drawing Rights (SDRs) could improve the health and economic recovery efforts of developing countries and prevent them from falling into insolvency.

“It would be helpful if a new issuance was combined with a voluntary reallocation of excess SDRs provided by countries with strong external positions to those that need them the most,” he said.

The Prime Minister further highlighted the need to establish a sovereign debt architecture mechanism that provides a framework for orderly and effective debt restructuring.

“With the collective will of the international community, we can successfully overcome these challenges and place ourselves on a more sustainable and resilient path over the years to come. The extraordinary nature of these times demands different thinking and action from us all. An effective, variable and scaleable response is possible and can lead to faster, stronger and more resilient recoveries,” he said.