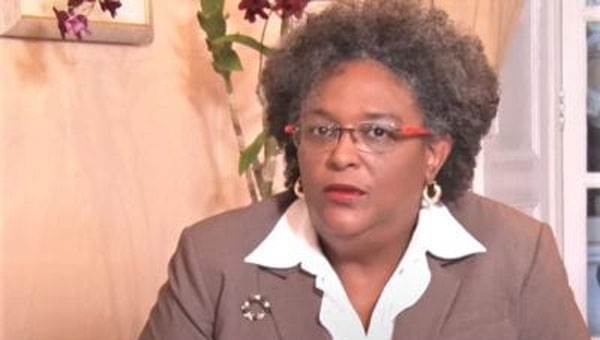 Barbados' Prime Minister, Mia Amor Mottley, told Barbadians that she, the Minister of Health, and many others, had been vaccinated and they were fine.

Mottley encouraged the population to stay focused and continue adhering to the protocols, as she opined that the level of compliance was greater than when the journey started.

She made the comments, last night, during a press conference, which dealt with a number of issues, including vaccines and the new minimum wage.

The Prime Minister told the nation: “We said that we did not want more than five percent positivity among all COVID-19 tests, carried out in the previous seven days. Positivity has generally been below five percent, with the exception of one day, I think, for the majority of the last two weeks. Today, I think it is just over two percent; yesterday it was at 1.6 percent and, in fact, most of the days, it’s been under two percent….

“So, my friends, we are not yet where we want to be, but we are way down the road in getting there. And, all I ask this country to do is, for us to remember that at this point in time, do not sacrifice the tremendous gains that we have made.”

She explained that several measurements were being used so that the government could track what was happening, in relation to the virus and the progress being made. She said that ideally, there should not have been more than 25 new COVID cases per 100,000, over the last two-week period.

“What has been our reality? In the last two weeks, we have had 66.8 cases per 100,000, which is down from the previous two weeks, when it was 113. Now, you would appreciate that that is a significant reduction from a month ago.

However, Mottley said there was a need to increase the number of people being tested for the virus, noting that people were currently being tested, because they were primary and secondary contacts of infected cases.

“We said that we would do more than 1,200 tests per 100,000 inhabitants in the previous seven days, and we have done approximately 1,200 tests per 100,000 inhabitants in the last week…. I am anxious for us to continue to increase the numbers, but the reality is, that we also need more persons coming forward, willing to volunteer to be tested, if we are going to get those numbers back up,” she indicated.

The Prime Minister said officials wanted the occupancy rate in the ICU isolation to be less than 75 percent, to ensure the health care system was not overtaken.

She reported there was an 18 percent occupancy in the ICU at Harrisons Point and 43 percent in the High Dependency Unit, adding that 63,715 people had already been vaccinated.