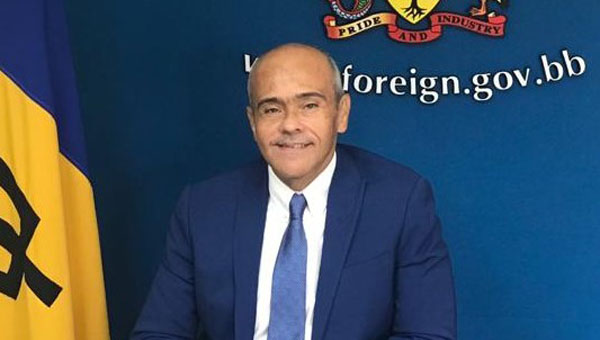 BRIDGETOWN, Barbados (Wednesday, April 7, 2021) — The government is doing all that it can to ensure that housing is available to all Barbadians, stated Minister of Housing, Lands and Maintenance, Dr. William Duguid, yesterday.

He made his remarks at the virtual Global Ministerial Conference, titled, “Knowledge and Innovation to Transform the World’s Cities”, while at the Ministry of Foreign Affairs and Foreign Trade.

The Housing Minister highlighted that his government was working to keep the costs of housing construction down, to make rental and home ownership more affordable, and was insisting that there be minimum standards of rental accommodation, such as access to indoor plumbing.

Dr. Duguid said it was government’s aim to eradicate all outdoor pit latrines from the landscape, in the shortest possible time, and to reduce housing density in public estates to make living conditions “more wholesome and socially desirable”.

He also spoke about the impact COVID-19 has had on the informal, and formal, sectors, noting that some persons from the formal sector had resorted to livelihoods in the informal sector, to earn a living.

In this regard, Dr. Duguid noted that vending had taken on a greater significance for many households, which were trying to survive in the COVID-19 environment.

“Improved facilities are being provided to vendors, to provide proper access for pedestrians, inclusive of wheelchair users along the main gateway of Bridgetown.

“….Efforts are underway to rationalise vending along the country’s main highway, by eliminating ad hoc and dangerous vending on the roadside, and by earmarking locations, along the highway, where designated vending, with proper sanitary facilities, can occur. By facilitating in this way, vending can become part of the formal economy, rather than a punitive approach that keeps vendors on the fringes,” he stated.

“This housing venture seeks to provide affordable high-quality two- and three-bedroom houses for first-time homeowners, earning a net maximum salary of US$2,000 per month. The monthly mortgage repayment costs will be, between approximately US$400 and $500…

“Under this new arrangement, the land will be provided to the prospective homeowner, at no direct cost to him. He or she only has to pay for house construction. The cost of the land is recovered through income streams, generated by photovoltaic (PV) systems to be installed on the roofs, the rights to use being transferred to HOPE Inc.,” he explained.

The Minister also disclosed that the HOPE program had received more than 5,000 applications, and is projected to produce at least 2,500 housing solutions during the next four to five years.

“Because of the harsh financial times, we are actively seeking some grant or concessionary funding, to allow us to replicate this model and double our targets. These targets will also include persons, earning between higher income bands, as well,” Minister Duguid added.