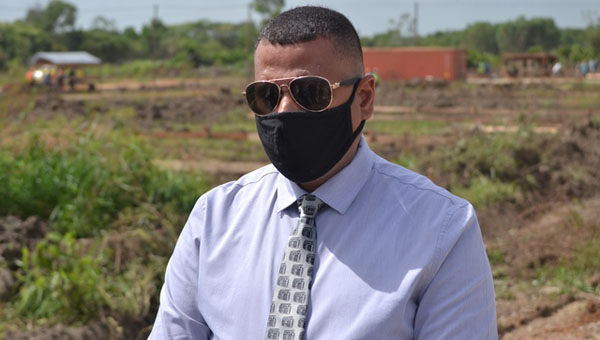 Minister of Housing and Water, Collin Croal, pays a visit to the construction site of the 190 homes in Cummings Lodge, yesterday. Photo credit: Jules Gibson.

GEORGETOWN, Guyana (Thursday, April 8, 2021) — The Ministry of Housing and Water and the Central Housing and Planning Authority (CH&PA), has commenced infrastructural works, and the construction of 190 low-income homes in Cummings Lodge, Greater Georgetown.

Housing Minister, Collin Croal, inspected ongoing works in the area, yesterday, and observed the foundation for the 20-feet by 30-feet, elevated units being laid. Construction is expected to be completed within four months.

“Only a few weeks ago, you would have seen, we signed about $1.5 billion infrastructure works for these two areas. It would take you, all the way to Aubrey Barker Road, so it’s a massive development.

“In the first phase, we are constructing about 190 elevated houses. Behind me, you can see the commencement, because at the contract signing too, we also signed the contract for the contractors to commence those houses,” he reported.

The infrastructural works, which include the construction of roads, bridges and drainage channels, will reach to Aubrey Barker Road, South Ruimveldt. Due to this distance, Minister Croal said an area has been identified for a police outpost.

“It is intended to be closer to the Aubrey Barker end, because, already, you have the Turkeyen Police Station, from this end of Sophia, so you can have security being placed from both sides.” 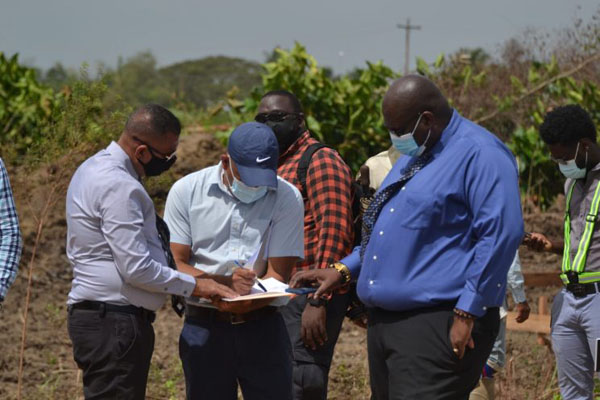 The homes are part of the 1,000 young professional and low-income housing units the Ministry plans to build, this year, as part of the CH&PA’s National Housing Development Program. The units will be built at Cummings Lodge, Prospect, Providence, Little Diamond and Great Diamond in Region Four; Onderneeming and Wales in Region Three; Ordnance/Fortlands, Hampshire and Williamsburg in Region Six, and Amelia’s Ward in Region 10.

Minister Croal was accompanied by Chief Executive Officer of the CH&PA, Sherwyn Greaves; and Permanent Secretary at the Ministry, Andre Ally; along with officials from the Community Development and Projects and Enforcement departments. A team from the Guyana Police Force, including Senior Superintendent of Police, Calvin Brutus; Deputy Commissioner (Ag.) Clifton Hicken; and Commander of Region Four – ‘A’ Division, Simon Mc Bean, was in attendance at the site.