Jamaica’s Minister of Agriculture and Fisheries, Floyd Green, says there are some efforts to increase the nation’s self-sufficiency, as well as to ramp up exports, which can help to balance the import bill. Photo credit: JIS.

KINGSTON, Jamaica, Thursday, April 8, 2021) IPS — Last year, Jaxine Scott was off work as a caregiver at a primary school, as a result of the pandemic. One day, she noticed a green shoot emerging from some garlic in her fridge. She decided to plant it, and to her surprise, it thrived.

“I thought ‘It looks like I have a green thumb, let me plant something else,’” Scott says. She now has a backyard garden, including cucumber, pumpkin, melon, callaloo, cantaloupe, pak choy and tomatoes.

“It makes me feel good,” she says. “I can help my family members and neighbours. It has saved me money. I’m not going to stop, I’m going to continue,” she says.

Scott, 45, is just one of thousands of Jamaicans, who have found an interest in gardening, both as a way to pass the time and to become more self-sufficient, when it comes to food and nutrition.

This is a small, yet important, step for a country and region, in which the trees are laden with an abundance of fruits, yet many people go hungry, every day.

An October 2020 study, of eight Caribbean countries, found that 40% of people surveyed experienced some form of hunger, with 42% of those saying it was moderate to severe.

The survey, by the College of Health Sciences at the University of Technology, included 2,257 households in eight countries, across the region (Jamaica, Trinidad and Tobago, Guyana, Belize, Barbados, St. Kitts and Nevis, St. Vincent and the Grenadines and Antigua and Barbuda.)

Another recent study, from the Caribbean Research and Policy Institute and Unicef, also found that in a survey of 500 Jamaican households, 44% reported that they were experiencing food shortages, while 78% said their savings could last them four weeks, or less.

Food security is a technical term referring to the availability of nutritious food, and defined by the United Nations as having “physical, social and economic access to sufficient, safe and nutritious food that meets their food preferences and dietary needs for an active and healthy life”.

The World Bank reports that despite the pandemic, there is adequate supply, however the challenge lies at the national level. The risks to food security include higher prices and reduced incomes, which forces households to rely on smaller portions of less nutritious foods.

“We suspected people were cutting back on their intake, especially households where the breadwinners were losing their jobs. It has shook up some of the households quite a bit. People are cutting back on the number of meals that they were having,” says Dr. Vanessa White Barrow, the Head for the School of Allied Health and Wellness at the University of Technology’s College of Health Sciences.

The effect of this, of course, has many repercussions, including malnutrition, lack of energy; obesity as a result of consuming lower-cost; but unhealthy; foods; and a variety of health issues, like diabetes and hypertension. 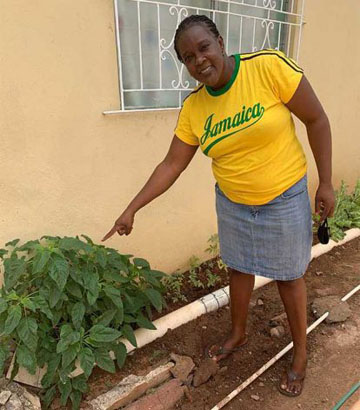 “What has happened, is that the nutrition divide has widened as a result of COVID,” says Prof. T. Alafia Samuels, of the Caribbean Health Research Institute, at the University of the West Indies.

“We also know that before, because of the extent that many household were dependent on processed food, people have cut back (on healthy foods) and are going for cheaper alternatives, and this has long-term health implications,” she says.

This especially impacts children, who need nutritious food to grow and learn, adequately. In addition, children are confined to their households, doing online learning and missing physical activity, they would have had at school.

Food and nutrition insecurity are just one frightening outcome of the pandemic, which has ravaged one of the most tourism-dependent regions in the world.

In Jamaica alone, a minimum of 50,000 people have been laid off from the tourism industry, a number that is likely even higher, when taking into account indirect employment. An estimated 135,000 people have lost their jobs in total.

The country’s real GDP for fiscal 2020/21 is expected to contract by up to 12%, according to the Bank of Jamaica, and the unemployment for Oct. 2020 was 10.7%. According to the World Bank, the percentage of people living below the poverty line was 19.3% in 2017, and while this figure had been improving, it is unlikely to continue this trajectory.

With this hardship in mind, the government has introduced a series of financial stimulus measures to reach the most vulnerable, but these are not sustainable. In addition to financial measures, the government has also focused on increasing food security, an effort that existed prior to the pandemic, but has since been ramped up.

In terms of boosting food security and assisting the farming industry, Jamaica’s Minister of Agriculture and Fisheries, Floyd Green, says that the government is investing JMD$1 billion this year.

Decreased market demand, in large part from the hotel and restaurant industry, has harmed the farming industry. So while, at times, there is an excess of supply, a lack of demand has impacted farmers and their production systems, which, in turn, erodes food security.

“The challenge with COVID is clearly the downturn in the market, which discourages the farmers from producing,” says Green, adding that they worry their supply will not be absorbed. With this in mind, the government created a “buy-back” program, which found new clients for farmers, which has helped.

“We saw an initial decline in production with COVID, when it came in, but we went back into a growth position overall, and now, year-over-year, seeing growth.”

Ultimately, Green says COVID has forced people to examine their self-sufficiency. “Covid has brought back, into sharp focus in the minds of people, the need to be more self-sufficient, when it comes to feeding ourselves.”

The need for self-sufficiency exists on a large scale as well, especially on an island that imports over US$1billion of goods, annually. And while some of that cannot be avoided, as it is inefficient or impossible to produce everything needed by Jamaicans, Green says there are some efforts to increase the nation’s self-sufficiency, as well as to ramp up exports, which can help to balance the import bill.

To this end, the government is looking to encourage production of ginger, turmeric, cocoa, coffee, castor oil, and mangoes, which are all in demand, because of their superior quality, he says.

“We are looking to further encourage incentive for some of our farmers to go into some of these crops. What you will see now, over the next three years, is a determined push towards export stimulation.”

In terms of local food supply, Green says it is sufficient. The issue, however, is with a lack of purchasing power, especially, of late, as a result of the economic downturn. “Our challenges is to restart the economy, to make sure people can get back purchasing power.”

Green mentions a backyard gardening program, in which 2,500 families, across the country, with a majority focus on urban areas, received a kit containing all the necessary tools to start a garden and become more self-sufficient.

“A lot of persons are at home with a lot of time on their hands, the elderly, middle age, they are at home, children are at home, and most times, having very little to do.

It would be very useful, at this time, to re-emphasize the backyard gardening program,” he says.

“This is very, very useful and timely, when you look at it, a lot of things produced, can be grown locally in our backyard and a lot of people have a lot of space.”

In addition to backyard gardening, both Samuels and Barrow-White add that government programs to identify and reach the most vulnerable communities and families will help increase food security.

Samuels is currently working with Jamaican churches to develop a database to identify these people.

“The plan is interventions, and we are proposing to actually support them, to roll out that kind of intervention that has worked in one church, so they can have a systematic way to find out who are the vulnerable, what needs to get them to the point. You need some kind of organization, you can’t go out there and look for people, one by one,” Dr. Samuels says.