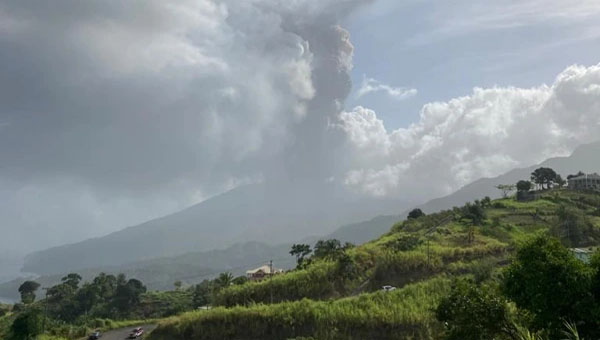 KINGSTOWN, St. Vincent and the Grenadines (Friday, April 9, 2021) — An explosive eruption began at the La Soufrière volcano, at 8:41 this morning, as reported by the UWI (University of the West Indies) Seismic Research Centre. The eruption, which is ongoing, is a culmination of the seismic activity that began yesterday.

Prime Minister of Saint Vincent and the Grenadines, Dr. Ralph Gonsalves, yesterday, declared a disaster alert, prompted by a change in the eruptive activity at the La Soufriere volcano, from Orange to Red. The declaration was made, during a press conference, held in Kingstown, yesterday afternoon.

Details of the change in activity at the volcano were outlined, during an 11am Cabinet meeting, where ministers were briefed on the state of the volcano, by the UWI Seismic Research Centre’s (UWI-SRC) Geologist, Prof. Richard Robertson, current Scientific Team Lead on the island.

At approximately 3:00am, local time, yesterday, volcanic tremor (VT) was observed by scientists, based at the Belmont Observatory in St. Vincent. This first band of tremor was later followed by subsequent bands at 5:30am, 8:00am, 10:15am and 1pm. 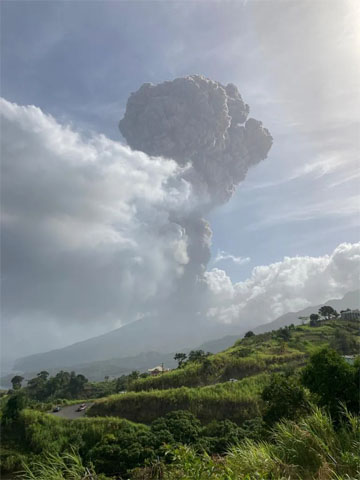 The UWI-Seismic Research Centre scientific team, based at the Belmont Observatory in St. Vincent, recorded six separate bands of volcanic tremor throughout the day. This new type of seismic event — usually associated with movement of magma and fluids close to the surface, plus ash venting — has not been observed, since the beginning of the eruption in December 2020.

An evacuation order was issued, yesterday, for communities in the Red volcanic hazard zone, by Prime Minister, Ralph Gonsalves, during the second of two press conferences, held in Kingstown.

Prof. Robertson indicated, “We cannot give any clear warning that nothing can happen, within the next 24-48 hours, and we would not be surprised if there are explosions at the volcano during that period.”

At alert level Red, the public is advised to urgently comply with directives, issued by the countyr’s National Emergency Management Organisation (NEMO), which has advised that safe areas are: those from North Union to Kingstown, on the Windward side of the island; Barouallie to Kingstown on the Leeward side; and the Grenadine Islands.

In a CARICOM statement, Chair, Dr Keith Rowley, said, yesterday, “The Caribbean Community (CARICOM) has mobilised to support St. Vincent and the Grenadines, as it faces the possibility of an imminent eruption of La Soufriere Volcano. Following an evacuation order of the immediate area around the volcano by Prime Minister Dr the Honourable Ralph Gonsalves, CARICOM Member States have offered support to house evacuees from the affected area.”

The scientific team from the UWI Seismic Research Centre (SRC) has been in the country constantly monitoring the volcano, and rendering scientific advice to the government; and the Caribbean Disaster Emergency Management Agency (CDEMA) has been working alongside the St. Vincent National Emergency Management Organisation (NEMO), the SRC and the Regional Security System (RSS), disclosed Dr. Rowley.

Guyana’s President, Dr Mohamed Irfaan Ali, stated, “Having regards to the emerging situation in St Vincent and the Grenadines, this afternoon, I called Prime Minister, Dr. Ralph Gonsalves, and assured him of Guyana’s full support in dealing with this looming crisis.”

He mentioned that he discussed immediate support, which will be required in the response, and that the Prime Minister indicated that, apart from the need to evacuate citizens, there were other emergency material needs.

Dr. Mitchell reaffirmed the country’s pledge of 1,600 beds at St. George’s University (SGU), to accommodate persons, who may need to be evacuated. This pledge was initially made in December, last year, following an emergency meeting of OECS leaders.

The Prime Minister said he has since spoken to the Chancellor at SGU, who assured him that all systems will be put in place, to quickly accommodate evacuees, should the need arise.

The volcanic eruption, and the resulting evacuation of residents comes in the midst of the global pandemic, with several countries struggling to reduce the number of new cases, while, at the same time, pushing ahead with vaccination programs; and Dr. Mitchell noted that, even as Grenada prepares to accept evacuees, protecting the health and safety of Grenadian nationals remains of paramount importance.

The Grenadian leader said his Vincentian counterpart has assured him that persons being evacuated will be required to have, at the very least, their first dose of the COVID-19 vaccine, and rigorous testing will be undertaken, in-keeping with Grenada’s entry protocols.

St. Lucia’s Prime Minister, Allen Chastanet, also reached out to Dr. Gonsalves, and indicated his island’s readiness to assist, in light of the latest developments with the ongoing eruption of the La Soufrière Volcano. 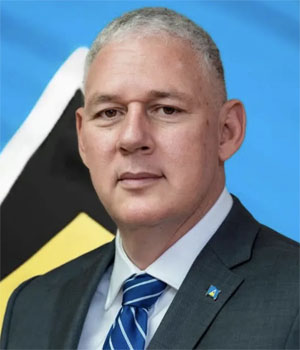 Saint Lucia’s National Emergency Management Organisation (NEMO) has been in preparation mode for some time, to assist St. Vincent and the Grenadines, as well as areas, which may be affected in Saint Lucia, in particular, the south of the island.

In light of the latest information and the evacuation order, issued in St. Vincent and the Grenadines, Prime Minister Chastanet has instructed NEMO to be on high alert and to accelerate plans to assist.

He called for continued calm, while indicating that citizens should be on full alert, and “continue to keep our brothers and sisters in St. Vincent and the Grenadines in our thoughts and prayers”.

The Saint Lucia Air and Sea Ports Authority (SLASPA), through its Disaster Preparedness Committee, today, activated its Port Response Plan to facilitate and receive evacuees. The plan identifies the George F.L Charles Airport and the Castries Seaport as the designated entry points for evacuees.

The Authority is working, in close tandem with essential partners, particularly the Ministry of Health and Wellness, to ensure adherence to the Ministry’s stipulated COVID-19 protocols.

SLASPA’s General Manager, Daren Cenac, noted, “Since the initial pronouncement of activity at the La Soufriere Volcano, the Authority reviewed and strengthened various aspects of its port operations. Our Airports Division is in active dialogue with the Eastern Caribbean Air Traffic Management Group to activate contingency plans for potential aviation disruption. As well, our Maritime and Seaports Divisions are working, assiduously, to ensure business continuity.”