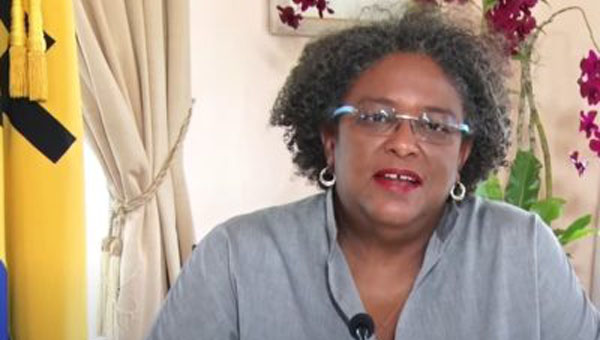 The Prime Minister gave the undertaking to fix the situation, yesterday, while speaking during a live press conference, at the Grantley Adams International Airport, to give an update on the COVID-19 situation and the national cleanup.

Over the last few days, the island’s water supply had been under strain, from householders, using hoses and power washers to clear their surroundings of ash from the La Soufriere volcano, in St. Vincent and the Grenadines, which began erupting, over the weekend.

Mottley stated that Minister Gooding-Edghill had already spoken to the Chairman of the Board and the General Manger of the Barbados Water Authority, to expedite the search for second-hand trucks, given the fact that nine trucks on order would not arrive in the island until around June.

“I have just told the people that I do not care how they do it, that if you have to buy second-hand trucks go and buy some, and get some potable water trucks in…. I can’t wait and go and tell anybody in the country to wait until June. So, the first thing I have done is to go and find some second-hand trucks and get them in here…,” she asserted

She appealed to Barbadians to “open up our arms and our hearts” and assist fellow Barbadians, who are experiencing discomfort, as a result of them being without water, due to increased usage.

“But I want to say to Bajans…you got family, let them come by you, or stay by you, and let us work out that for the next week or two. It will be difficult, and this is not the first difficult time that this country has had to go through,” Mottley emphasised.

She noted that a number of projects are ongoing, by the BWA, to provide relief to residents, living in Bagatelle, parts of St. Joseph, St. John and other districts, but lamented that the country was not yet at the stage, where there were no more complaints about water outages.

“It pains my heart that we are not yet there and, as it relates to those households, I have said to the BWA and the Minister, let me see the districts, because I now want a daily report to ensure that with this increased usage, that we are in a position to help these persons with basic needs, and that is why you heard me, earlier, appeal to Bajans to save the water…be sparing with it,” the Prime Minister underlined.

She urged Barbadians to conserve water and reminded them not to take long showers; turn off the taps when brushing their teeth, and be each other’s keeper, failing which, “all of us will suffer, as a result, and we already know how critical access to water is at this stage”.