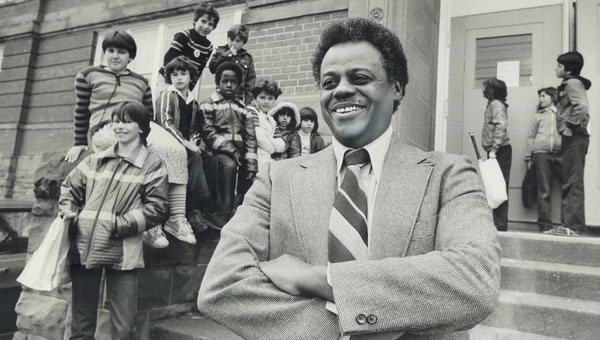 Wilson Brooks was hired as the first Black educator in a Toronto public school in 1952, and went on to become the first Black school principal in Toronto. Photo credit: torontopubliclibrary.ca

Historically, while Canada did not have segregation (Jim Crow) laws, like in the United States, segregation did exist in this country.

Black History Month is as much about reflecting on the past, as it is about the present and the promising future that lies ahead. It is also a reminder that this important part of our heritage belongs in the forefront of our consciousness, not just the 28 or 29 days of February, but every day of every year. That struggle has continually defined our story and identity, and is a part of who we are, as we move forward.

Throughout, the history of Canada, there has been multiple examples of Black people being segregated, excluded from, or denied equal access to, opportunities and services, such as education, employment, housing, transportation, immigration, health care and commercial establishments.

The narratives of certain Ontario provincial areas include accounts of segregation, racial injustice, redlining and oppression — themes that have lingered for far too long and continue to have an impact on systemic racism today. The racial segregation of Black people in Canada was historically enforced through laws, court decisions and social norms.

In the early 19th century, the provincial governments of Ontario created legally-segregated common schools, also known as public schools. When the public school structure was being formalized, Ontario school trustees (all White) created separate schools for Black children in certain parts of southwestern Ontario, particularly where there were high concentrations of recently-arrived freedom seekers.

There were also reported cases of trustees tampering with electoral boundaries to prevent Black children from attending certain schools, thereby requiring them to attend the all-Black separate school in the district.

Trustees also warned teachers, in favour of integrating classrooms that they could be docked pay or fired, for speaking out. In some places, there were separate school buildings designated as “negro schools”.

Racism and segregation remain embedded in the institutional fabric of formal schooling systems across Canada.

In other places, such as Hamilton and West Flamboro, students attended school in the same one-room schoolhouse, but at separate times. If attending at the same time, they were relegated to different benches, based on their race. Race-based separate schools flourished in Niagara, St. Catharines, Dresden, Simcoe, Chatham, Buxton, Sandwich, Gosfield, Mulden, Anderdon and Colchester.

Racially-segregated schools in Ontario were gradually phased out, as a result of the activism of Black parents. Newly-elected first Black Member of Provincial Parliament, Leonard Braithwaite, put forth a motion for the Separate Schools clause on segregated schools for Blacks to be officially removed from provincial education policy. On March 12, 1964, Minister of Education, Bill Davis, amended the Separate Schools Act to remove all references to segregated schools, and in June 1965, the last racially-segregated School Section No.11, located in Colchester, Ontario, closed.

September marks the beginning of a new school year, and in Canada, in September 2009, a landmark in the history of formal education — the much-debated “Black-focused” school, after years of advocacy, was established in Toronto, the most multicultural city in Canada.

Conclusively, education still remains one facet of Black Canadian history that has not been well understood. When Black education is discussed, the emergence of segregated schools is often presented, as a response to requests by Blacks, to be separate.

Educators
Racism and segregation remain embedded in the institutional fabric of formal schooling systems across Canada. As the nation worked to address the needs of its diversifying population, the positions of Black women within the teaching profession, served as areas of struggle and conflict.

From their entry into teachers’ college through their careers in the classroom and administration, Black women educators encountered systemic racism and gender barriers at every step.

They worked to change the system. They skillfully circumvented subtle and overt forms of racial and social exclusion to create resistive teaching methods that centered Black knowledge and traditions.

Following receipt of her Ontario teaching certificate in 1963, Jean Augustine, the first Black Canadian woman elected to Parliament, joined the Metropolitan Separate School Board in Ontario, as an elementary school teacher.

In the United States, following the result of Brown vs Board of Education, wherein many Black teachers lost their jobs, and were often unable to access positions in public Boards, the same was applicable to Canada, where unacknowledged forms of racial prejudice ensured that Black educators could not gain access to public school systems, until the middle of the 20th century.

By the time Wilson Brooks was hired as the first Black educator in a Toronto public school in 1952, Black students continued to face challenges in public schools, as a direct consequence of these historical exclusions. He went on to become the first Black principal in Toronto.

Ultimately, the Common School Act of 1850 was one of many policies that left Black students disadvantaged, throughout Canadian school systems.