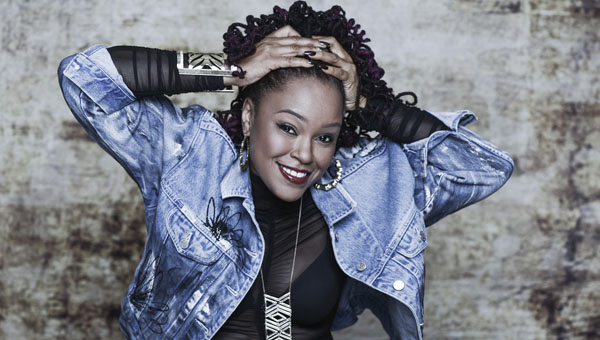 As the first Canadian MC signed to a U.S. major label, during the ’80s, breaking down musical barriers is nothing new for this veteran.

Not only does the Canadian rap icon’s new album, Bahdgyal’s Revenge, released in October 2020, heralds her long-overdue return to music, but it also casts what is, arguably, the widest musical net of her career — incorporating Michie’s Jamaican roots, dancehall reggae, rock, and hip hop, ultimately creating a sound that is at once timeless and timely.

There is an overarching feeling of gratitude running throughout the course Bahdgyal’s Revenge, and sounding as vital and hungry as she did when she first burst on the scene more than 30 years ago, it’s clear, from the opening notes of the album, that Michie is taking nothing for granted.

Following the release of her last full-length effort, The First Cut Is The Deepest, in 2000, Michie made a slight retreat from music and entered the world of television and movies. Now that’s not to say she completely turned her back on music. There were one-off singles: 2009’s “Say About Us”; “Bahdgyal Bubble” (2012); and 2013’s “Stand Right Beside Him” — but the seeds to Bahdgyal’s Revenge were actually planted in the few years leading up to the album’s release.

While acknowledging there was no lack of cheerleaders suggesting she get back into the recording studio, sooner rather than later, the MC knew she had to let things unfurl organically.

“I’m someone that’s always writing, but I have to live life, before I write about it,” Michie says. “As an older artist making music in today’s landscape, I wanted to take a mature approach to these songs and write about specific situations and specific emotions. I want to write songs that will resonate with listeners and that people might see themselves in.”

Taking a simple melody, from what sounds like a children’s toy piano, the heavy-hitting “Forgot About Mich (FAM)” sees Michie take the bold step of a reintroduction to her audience.

Sounding as though she hasn’t missed a beat in the two-plus decades, since her last full-length album, she spits rhymes with intense precision.

On “Thank You,” the rapper pays tribute to those, who have loaned a hand, a stage, a word of encouragement and so much more, along her journey. Additionally, Michie acknowledges the strong females, who helped raise her, namely her mother, as well as both of her grandmothers, pouring her heart out, over a Roc Nation-inspired beat. “There aren’t enough words to express how these people, working behind the scenes, guided me and encouraged me to follow my dreams,” she says.

Michie lights up when talk turns to the optimistically upbeat “Love Everybody”, on which she shares vocal duties with Tonya P and Xentury.

“We cut that song right before the COVID pandemic started,” she recalls. “But what made the session so memorable, was being in the studio with Tonya and Xentury. Technology makes it convenient to record at home and just send in your tracks, but there’s an energy, a vibe, that comes when you’re gathered together in the studio. We all had the chance to be on the same wavelength and I think you can hear that in the song.”

“Michie Mee is committed to the craft and honed her skills as a stage MC, in front of a crowd. It’s that trial by fire that ultimately makes the best, the best” — Public Enemy’s Chuck D

The first single from Bahdgyal’s Revenge, the hard-hitting “Made It”, sees Michie delve into the day-to-day struggles, which no one seems to be immune from escaping. But the track also rises above those issues, to poignantly offer words of encouragement and highlights the importance of being persistent and patient.

“The song reflects on the next generation that’s coming up, but rather than focusing on the pessimistic side of life, I wanted to let them know how important it is to stand by their beliefs and their community, and that they can make it through anything. [Author] Colin Rickards, [entertainment agency] Jones & Jones, and [children’s author] Itah Sadu were the ones I watched and listened to, within the Black community, when it came to guidance and faith.”

“On Willing and Able I just straight let ‘em have it in a freestyle lyric-based rap”, adds Michie. “Vintage mint condition play my position last disposition, rap musician, because music is what I do. I stand my ground on I’m you bahdgyal Aunty, a grown-ass woman still rapping. I know where you lil bahdgirls coming from I been doing it a long time. There are a lot of interesting references in this song”.

The lone rock track on the album, “What U Talking Bout”, is reminiscent of Michie’s days as a founding member of alternative rock band, Raggadeath. Fusing heavy metal with dancehall reggae, the band’s hit “One Life” received heavy airplay on Much Music in 1995 and was named Favourite Song of the Year, by readers of Chart magazine.

On the track, Michie takes some not-so-veiled shots at the old guard of the music business, which she says was all too happy to benefit from her hard work, but went MIA (missing in action) when it came time to collect the cheque.

There is no doubt that Michie Mee’s impact on Canadian music and culture has been vast. She blew open doors for a generation of artists, who didn’t even know those doors existed.

And now with Bahdgyal’s Revenge, she boldly reasserts her legacy as a trailblazer, with what could be the most important album of her career.

As Public Enemy’s Chuck D so eloquently (and accurately) states in the album’s intro, “The time has come for Michie Mee/One of the women showing the longevity of the female MC…”

“Made It” is the first of three music videos, slated for release, to promote the album, and the video can be seen here: youtu.be/ZMW2-O7Vktc