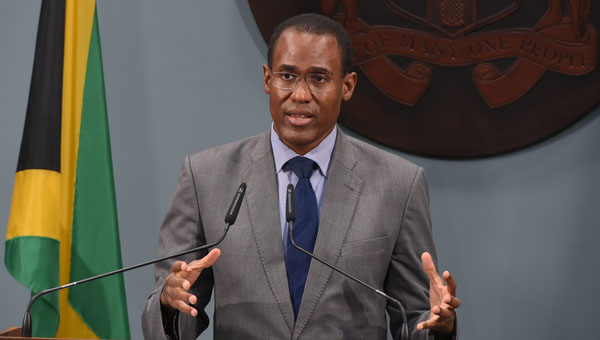 KINGSTON, Jamaica (Friday, April 30, 2021) — The government has approved the expansion of allowable foreign assets, in which domestic capital and financial market intermediaries can invest, effective today.

These are corporate, foreign-currency debt instruments, issued by entities incorporated in Jamaica, that generate foreign earnings, and attain an investment grade global credit rating or Caribbean Information and Credit Rating Services Limited (CariCRIS) rating of at least ‘good’ or ‘strong” on the national long- and short-term rating scales, respectively.

Also included are publicly traded shares, in such organisations, that are issued in foreign currency, and whose debts are similarly rated.

He was speaking during  the virtual launch of CariCRIS’ Jamaica office, on Wednesday.

Dr. Clarke explained that the set of allowable foreign instruments also includes Bank of Jamaica (BOJ) certificates of deposit, denominated in foreign currency; government of Jamaica-guaranteed corporate foreign currency debt instruments, issued by entities incorporated in Jamaica; and finally, publicly traded shares of corporate entities, incorporated outside of Jamaica, with shares issued in US Dollars, British Pounds, Euros, and Canadian Dollars, with market capitalisation of US$10 billion or greater.

The Finance Minister elaborated that the expansion was among the recommendations of the Financial Deepening Task Force, which he appointed in 2018, in keeping with its terms of reference.

These, he indicated, included: recommending reforms that can lead to the acceleration of access to finance and the creation of investible domestic assets; increasing the transparency and price discovery of domestic assets; and standardising asset quality for sound investments, through a program to have independent issuers of domestic assets to support the transition, from zero risk-rated government issues to non-government assets that support prudent investments by investors.

“This vision, laid out in 2018, was important because Jamaica has embarked on a long-term process on deleveraging public debt. By the process of the government deleveraging itself, pools of investable funds were becoming, are becoming and will continue to become, available. We want to make sure that they are channeled productively, so that we can enjoy an expansion of our economy in a sustainable way,” Dr. Clarke added.

The CariCRIS Jamaica office is the first to be established, anywhere in the region outside the Trinidad and Tobago capital, Port-of-Spain, where the entity is headquartered.

The office is situated in the PanJam Building, in the heart of the New Kingston business district.