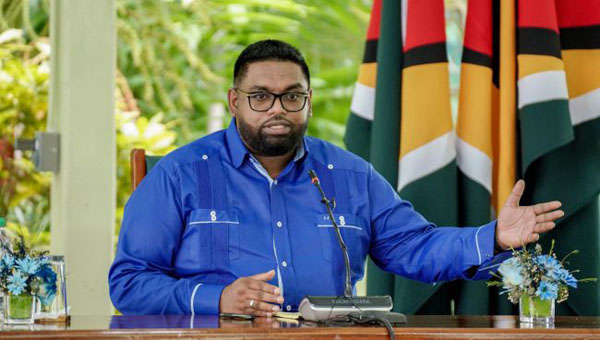 GEORGETOWN, Guyana (Friday, April 30, 2021) — When the government is ready to award new oil blocks, the process will be done, transparently, to ensure that the best offer is received, promised President, Dr. Irfaan Ali, adding that his administration may consider managing some of the blocks.

President Ali was responding to questions from the media at a Presidential Press Conference, held on Wednesday, at Baridi Benab, State House.

“We have made it very clear, that the process in awarding new oil blocks will be very much different. It will be an open, public process and, when we get to that stage, it will be a public, open bidding process. We will be looking for the best offer in an open public bid.”

He, however, noted that the government is currently having preliminary discussions, on whether Guyana will retain some amount of petroleum blocks.

“…Discussions are still ongoing. It calls for a lot of technical analysis, on whether Guyana, itself, will retain some of those blocks for our own development and to manage by ourselves, but that is very preliminary.”

The President was questioned, extensively, on the oil and gas sector, especially on how the revenues will be spent.

The Head of State stressed that the oil revenues must be used to strengthen existing opportunities in Guyana, and to open new opportunities for investment, economic growth and social development, among other areas.

“In creating those opportunities, we have to ensure that there is equity and there is no widening, between those who have and those who don’t have… The resources have to be used to close that gap. So healthcare, education, food security, housing, these are all areas that are critical to closing that gap.”

He highlighted that new opportunities will be opened for ownership of land, farming and other agriculture, and for Guyana to realise its potential to become the prime supplier of food, regionally.

President Ali stressed that resources must also be used to open up new opportunities in the development of the manufacturing and industrial sector.  These include the cost of energy, which will lower the cost of production and enhance global competitiveness.

“We have to look at how we make investments to create the energy mix that would, not only satisfy our local demand, but that will be part of the energy corridor that is currently being discussed, along with the Guiana Shield.”

Ali said that the government is also focusing, heavily, on the improvement of the republic’s national infrastructure.

“We cannot continue losing thousands of man-hours, every day, in traffic. We have to understand that our country is growing, that the need for infrastructure is expanding. So these are the areas that we have to target.”

The President added that while the template for the oil revenue has been outlined, there are several things — including the setting up of the Petroleum Commission, finalising of the legislation for the Sovereign Wealth Fund, among other things — that need to be done, before the spending of the oil revenue.

He emphasised that, at this moment, the government is not relying on the oil revenue to meet the budgetary expenditure, and that when the macro development plan is laid out, later in the year, “that discussion will take place”.