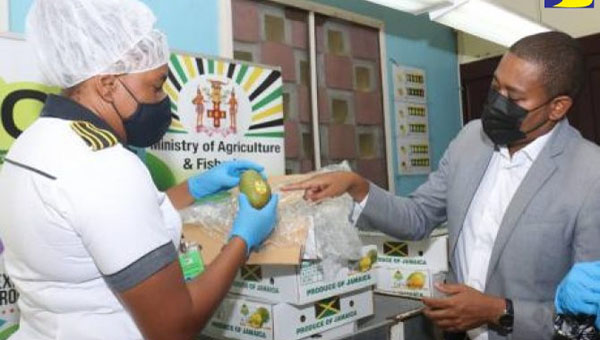 Agriculture and Fisheries Minister, Floyd Green (right), is shown a sample of the over 5,000 kilograms of East Indian and St. Julian mangoes that were shipped from the Sangster International Airport in Montego Bay to the United States of America (USA) on April 30, by Plant Quarantine Officer, Solangie Johnson. Photo credit: Garwin Davis/JIS.

MONTEGO BAY, Jamaica (Tuesday, May 4, 2021) — Agriculture and Fisheries Minister, Floyd Green, projected that the growth of Jamaica’s mango export program will boost the volume of goods, shipped to external markets this year.

“We are very happy to see the growth of the program, as we are doing over 1,000 boxes of mangoes to the United States. We have [advanced significantly] from when we had only two registered farmers, to now having over 18 farmers [who] are registered. Plus, we had only one registered exporter, and now, we have nine exporters,” Green said, adding that “we are looking to see tremendous growth this season.”

He was speaking with JIS the Jamaica Information Service (JIS), after seeing off a shipment of some 1,100 boxes of East Indian and St. Julian mangoes, totalling over 5,000 kilograms, to the US, from the Sangster International Airport in Montego Bay, last Friday.

The shipment is the first to that country for 2021, and the second since the start of the year, following the exportation of over 4,000 kilograms of the fruit to the United Kingdom (UK) in April.

Jamaica resumed exporting mangoes to the US in 2019, shipping some 8,151 kilograms, after being out of that market, since 1999.

Prior to the 2019 shipment, the United States Department of Agriculture (USDA) had given clearance for local mango exports in 2014. Up to that time, Jamaica was exporting mangoes to Diaspora markets in Canada and the UK. A total of 654,954 kgs were shipped to Canada in 2013, and another 691,206 kgs. in 2014.

Green, who noted that the US shipment marked the first of several being targeted for 2021, said Jamaica is focused on becoming a major global supplier of fruits, among other agricultural produce.

“We are on a mission to take the best fruits in the world, to the world,” he declared.

The Minister further said, he was optimistic that the construction of a hot-water treatment plant, which is slated for completion this fiscal year, will aid in Jamaica’s quest to tap into more external markets for mangoes.

Noting the USDA’s endorsement of the facility’s development, Green said, “we expect that that will really open up [opportunities for] mango exportation into the United States, to a lot more mango farmers.”

“We think that is a tremendous development… as we continue to expand our export reach,” he added.