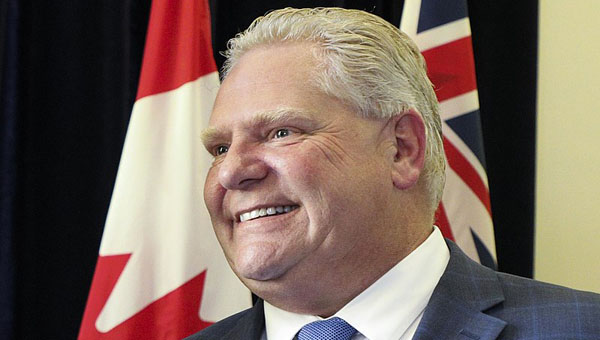 Recent days have been the bleakest in a dark year for Ontario residents. The variant-driven third, and most serious, wave of COVID-19 has brought the province’s hospital system to the edge of critical breakdowns and claimed the life of a 13-year-old girl — among Canada’s youngest victims in one of its most pandemic-ravaged communities.

Yet the province’s government, led by Premier Doug Ford, seems incapable of formulating an effective response to the situation. It has again failed to act on clear warnings, from health experts. It has been left to individual local medical officers of health, especially in the hard-hit City of Toronto and Peel Region, to take direct action, against key sources of outbreaks of the virus, like industrial and warehousing and distribution facilities.

The government seems unable to act on the consistent advice of its own science advisory table, preferring instead to avoid offending the industrial and business stakeholders, to which the government consistently listens.

Instead, when confronted with the worst public health disaster in the province’s modern history, the government’s de facto governance model of trying to run a province of 14 million people by the seat of its pants has, predictably, led to disaster.

Not surprisingly, the situation has fuelled calls for Ford’s resignation, even in a large American newspaper. Whether such a step would really help the situation, particularly in the absence of an obvious competent successor within the governing party, is unknown. An election, at the current stage of the pandemic, seems almost unimaginable, diverting energy and attention from the immediate crisis at hand, and further disabling decision-making.

The more critical issue, at this point, is what to do to bring an effective governance structure to the province’s response to the crisis.

Such an approach could have considerable advantages. It might strengthen the legitimacy of the provincial government’s leadership in the crisis, while widening the range of perspectives and pool of talent, available at the political level. The Liberal and NDP caucuses include individuals, with previous government experience and in-depth understandings of government operations.

At the same time, whatever form of government emerges, the cabinet needs to step back from the day-to-day management of the pandemic. A new chief medical officer of health needs to be appointed.

This needs to be someone more engaged, energetic and willing and able to stand up to politicians — publicly, if necessary — than the position’s current occupant, Dr. David Williams. The role also needs an individual better able to understand, integrate and act on the scientific advice being provided to the province.

A final, largely-unnoticed, but significant, factor in the circumstance, in which Ontario finds itself, has been the absence of a consistent voice from the province’s medical professionals. In the past, the Ontario Medical Association (OMA), aside from its role as an advocate for the province’s doctors, has been a powerful and highly-influential voice around public health matters.

Paid sick days
The basic menu of other actions is well-known — paid sick leave for workers; a serious re-examination of what are truly essential workplaces, particularly in hard-hit areas; vigorous enforcement of the rules around personal protective equipment, physical distancing, outbreaks and other critical practices in the workplaces that are deemed essential; better targeting of vaccine rollout to vulnerable populations and locations; limiting mobility, while allowing safe outdoor activities to occur; and doing whatever is necessary to support local health units and hospitals through, what’s hopefully, the last, most disastrous phase of the pandemic.

Under mounting pressure, the government announced a plan to provide three paid sick days, through a temporary program, ending in September.

Beyond the province’s own incompetence, other factors have contributed to the current disaster and need to be addressed.

The federal government’s failure to impose and enforce serious travel restrictions — even to and from high-risk locations like Brazil, India and Pakistan — until far too late, has been a significant contributor to the current, variant-driven COVID-19 wave in Ontario. Steps need to be taken to address that situation, immediately.

Better income support from the federal government is going to be needed for those, whose jobs are affected by tighter definitions of what constitutes essential workplaces.

Where’s the Ontario Medical Association?
A final, largely unnoticed, but significant, factor in the circumstance, in which Ontario finds itself, has been the absence of a consistent voice from the province’s medical professionals. In the past, the Ontario Medical Association (OMA), aside from its role as an advocate for the province’s doctors, has been a powerful and highly-influential voice around public health matters.

The OMA has played a major role in advancing anti-smoking policies. It was deeply involved in drinking water safety issues in the aftermath of the E. coli disaster in Walkerton, Ont. And the association’s interventions around the health impacts of smog and air pollution were instrumental to the implementation of the phase-out of coal-fired electricity in the province.

The OMA’s relative silence, through the pandemic has left a serious gap. The association could play a role as a consistent voice on the pandemic from the medical profession, and provide political support to the front-line medical officers of health. These functions have instead fallen to other organizations, notably the Ontario Hospital Association and Registered Nurses Association of Ontario, and ultimately individual, front-line physicians and academic researchers.

COVID’s third wave has brought Ontario to the brink of catastrophe. The best options for controlling the situation are well understood, but whether the provincial government can, or will, implement them remains an open question.