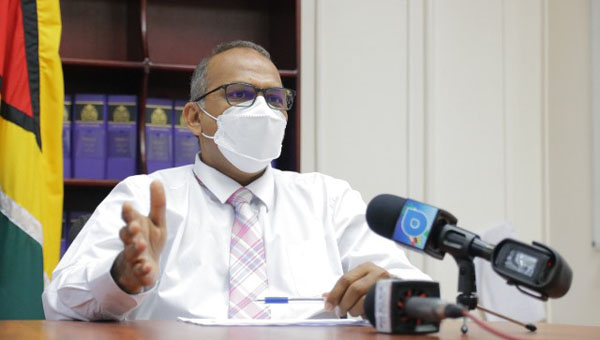 GEORGETOWN, Guyana (Friday, May 7, 2021) — Minister of Health, Dr. Frank Anthony has divulged that auditors have found over $1 billion in expired medications and medical and diagnostic supplies at regional bonds.

Minister Anthony, who was speaking during a press conference, yesterday, said, the government made the decision to audit the regional bonds, after initially discovering over $10 billion in expired drugs at the central bond, when it came into office, last August.

“So, from that report, having completed the audit in every one of the regions, we have been able to ascertain that, in the 10 regions, we have had another $1.1 billion of expired medications, medical supplies and laboratory and diagnostic supplies…these were all expired, before we came into government,” he announced.

Minister Anthony said he is in receipt of the executive summary of the report, compiled by the auditors, and that he will receive the complete report, in a week’s time.

In the meantime, the Health Minister said the government has also been able to validate the stock of medicine it has given to the different regions, to offset shortages.

“So, while we have expired [drugs] in those regions, we have also been working, very hard, to replenish, and to make sure, that it has adequate medicines to continue doing their work,” Minister Anthony explained.

He said, since coming into office, the PPP/C Administration has changed the old system of having the regions purchase their own medicines and supplies; instead, there is now one centralised purchase, with a proper check-and-balance method in place, to avoid any repeat of the previous system’s waste.