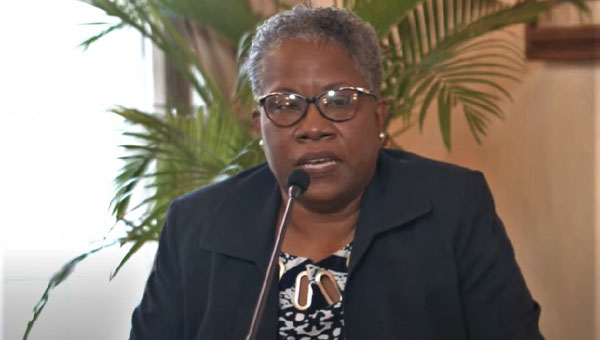 Barbados' Acting Chief Education Officer, Joy Adamson, said the Ministry of Education will be monitoring the psychological health of students, who were affected by the COVID-19 scare at the St. George Primary and Princess Margaret Secondary Schools. Photo credit: PMO.

BRIDGETOWN, Barbados (Friday, May 7, 2021) — The Ministry of Education, Technological and Vocational Training (METVT) will be monitoring the psychological health of students, who were affected by the COVID-19 scare at two public schools.

Acting Chief Education Officer, Joy Adamson, made the revelation, in response to a question, on whether the situation would affect students’ preparation for the Barbados Secondary School Entrance Examination and the Caribbean Examinations Council exams.

She was speaking during a press conference, televised from Ilaro Court, last evening, to update the country on suspected exposure to the virus at St. George Primary and Princess Margaret Secondary School. The two students at the centre of this situation have been linked to two family clusters.

Adamson said, given the situation, there will be no classes at the Six Roads, St. Philip secondary institution, today, Friday, May 7.

“The principal would have met with the staff, today, and the students. We know that some students will not be in a frame of mind to continue some of their practical exams. That is something we would have to monitor, say, next week. Tomorrow’s classes will be suspended and we will be monitoring those students. Remember, they’re the exam students for the CXC, so they have the option to defer, if they need to,” she explained.

However, classes for the students of St. George Primary would continue online, as scheduled, Adamson stated.

Meanwhile, Minister of Health and Wellness, Lieutenant-Colonel Jeffrey Bostic, noted that despite this development, there was nothing to suggest it would disrupt the hosting of face-to-face sessions across the school system.

Schools reopened on Monday, but only for primary students in Classes 3 and 4, and their fifth and sixth form secondary school counterparts.

“Barbados declared, months ago, that we had community spread.  I accept that, but I can tell you maybe six weeks ago, there was consideration for reopening of face-to-face school.  And, at that time, the Ministry of Health and Wellness advised against that. Why? Because when we looked at our map, we were still seeing cases springing up in several communities, around the country. For us, that would’ve been taking a risk that we did not think, at the time, would have been a manageable risk.

“However, at this point in time, we have a situation, where our positivity average for the past two weeks — and I know we had a little spike about two days now — has been [around] one percent. And to be honest with you, the cases have not been springing up around the country….At the moment, we’re not seeing any widespread cases coming out of any of the situations we have been dealing with, and, for that reason, I would say to you, there is absolutely no reason why we should not have face-to-face classes,” he explained.

The Minister of Health also sought to allay the fears of the public, pointing out that there was “limited exposure” among the students, due to the enforcement of the established COVID-19 protocols in schools.

Referring to the situation at Princess Margaret Secondary School, which involves over 50 persons, the Minister stated: “The 58 students are from two classes — persons, who happen to be at school at that point in time. If you would recall, the Minister of Health happened to be at the airport to meet the Ghanaian nurses when they arrived; following all of these protocols, wearing my mask, social distancing and everything. I didn’t have any contact, but I happened to be there within a space.

“I went into quarantine and I was tested. I was absolutely certain in my mind that I was okay, but the protocol called for me to do that.  And this is a similar situation.  It is not that these students were close…. We consider that to have been limited exposure, but we still have to follow the science, and do what is required.”