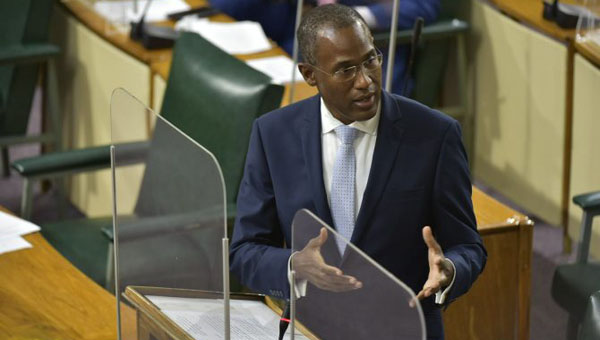 Jamaica's Minister of Finance and the Public Service, Dr. Nigel Clarke, emphasises a point, while addressing the House of Representative on Wednesday (May 5). Photo credit: Donald De La Haye/JIS.

KINGSTON, Jamaica (Friday, May 7, 2021) — A total of $321 million has been earmarked, under the Government’s Social and Economic Recovery and Vaccine Program for Jamaica (SERVE), to purchase digital devices for students in need.

The devices, to be procured by e-Learning Jamaica Limited, are being acquired for youngsters, who have not benefited from similar provisions, under other State-funded initiatives.

The engagement, dubbed the ‘SERVE Jamaica Digital Device Program’, is the first component being embarked on, under the $60-billion SERVE Jamaica Program, which was announced by Minister of Finance and the Public Service, Dr. Nigel Clarke, during the 2021/22 Budget Debate in the House of Representatives in March.

SERVE Jamaica is intended to lay the foundation for the country’s recovery, from the fallout resulting from the novel coronavirus (COVID-19) pandemic.

The Minister outlined details of the SERVE Jamaica Digital Program, during the House’s sitting on Wednesday (May 5).

It is a collaboration involving the Ministries of Finance and the Public Service; Education, Youth and Information; Science, Energy and Technology; and Local Government and Rural Development, as well as Members of Parliament (MPs), through the Constituency Development Fund (CDF), and Councillors of Municipal Corporations island-wide.

Dr. Clarke announced that the government will provide $189 million to purchase devices for students, identified by MPs. This will see $3 million being programmed for each of the 63 constituencies.

He said, while a maximum of 100 students per constituency is being targeted, consideration would be given to facilitating more youngsters, where needed, and if possible.

The Minister noted that the CDF will be utilised to facilitate the requisite administrative procedures in constituencies, including providing students’ names, schools and registration numbers, and instructions, regarding deployment and collection of the devices.

He advised that arrangements, involving Councillors, will be piloted by the Local Government Ministry.

The Ministry of Education will cross-reference the lists of proposed beneficiaries with the database for its various similar engagements, to avoid duplications.

“Once the devices have been procured, by e-Learning Jamaica Company Limited, the Ministry of Finance and the Public Service will make payment to the supplier, directly, by instruction, from the Accountant General’s Department,” Dr. Clarke informed the Assembly.

The Minister explained that students receiving devices, provided under other State-funded initiatives, will not be eligible for a similar provision under the SERVE Jamaica Program.

He further advised that the devices are expected to be available for distribution, during the back-to-school preparatory period in August,

“The SERVE Jamaica Digital Device Program does not replace the existing Ministry of Education, Youth and Information programs. It cannot. It is a much smaller program, in size. It merely complements and supplements the larger central government program,” Dr. Clarke stated.

Local Government Minister, Desmond McKenzie, in his remarks, welcomed the initiative and the decision to involve representatives of the Municipal Corporations.

“I want to give the assurance, that I will ensure that the process, under which the instruments will be made available, is adhered to,” he said.