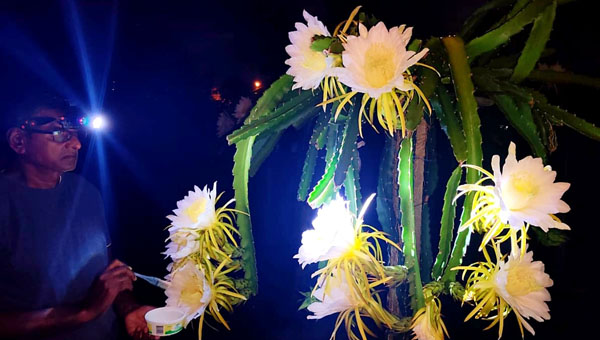 Richard Cantillon (1680-1734) — reputed as the founding father of modern economics — brought the role of the entrepreneur to the attention of scholars. He viewed the entrepreneur as one, who bears the risk of establishing a creative enterprise by covering the start-up cost and carrying out production, before market demand and price are known.

In the book, by Dr. Kumar Mahabir, entitled Medicinal and Edible Plants, he states, that the plant is also called harjor in Bhojpuri Hindi, as well as the Night-blooming Cereus of the Cactaceae family. Its botanical name is Hylocreus lemairei and it is possibly a native of Suriname.

Health Benefits of Dragon Fruit
According to Singh, “A lady in Thailand used the dragon fruit as natural medicine. It helped her child with cerebral palsy who suffered tremendously from constipation, so she began to cultivate it.”

Clinical professor at Boston University, Joan Salge Blake, confirmed that one piece of dragon fruit can contain up to 7g of fiber, a little less than a quarter of the recommended daily intake (25-30g), and such a potent amount will “clean you right out.”

Singh advised: “In Trinidad, a lot of the older folks call it harjor and, traditionally, when a new baby was born, a small piece of the plant (a cactus, which are widespread parasites on such trees as immortelle and mango), is hung at the door to prevent evil.

“Also, older folks would pound the cactus to make a poultice to treat injured parts of the body, because it has anti-inflammatory properties.”

In his book, Dr. Mahabir states that the “sticky substance is ground with turmeric and applied, externally, for the healing of sprains, blows and lashes”.

New York-based nutrition consultant, Keri Gans, confirmed that omega-3s, of which the dragon fruit is a rich source, is thought to have anti-inflammatory properties that may help to decrease joint pain, risk for heart disease and depression.

How a hobby turned into a business
Singh first encountered dragon fruits in China, but was not impressed, because its flavour was bland. That he would later come to be known as “the dragon fruit man in Penal” can best be described as, one of those odd acts of serendipity.

He shared that “in September of 2017, after having dinner in a little village, close to Paramaribo in Suriname, I was served dragon fruit. This red variety was so very sweet that I didn’t believe this was the same dragon fruits that I had eaten in China!”

Red Dragon Fruit
It was so satisfying that he helped himself to more, until the platter was clean, and then, “I asked the host for some seeds”.

He did not consider a market, but did it because, “I love fruits and I was so excited about cultivating this fruit”!

“I got about 400 seedlings from those seeds. I took care of it, from September until March 2018. After that, it was so frustrating trying to grow the seedlings that I just threw them out.”

But his interest was piqued and, after research and experimentation, he found that the seedlings took six to 10 years to bear fruit, so he opted instead to try cuttings from Suriname.

Out of that grew the Pioneer Dragon Fruit Farm, which, according to Singh, “… is no longer a hobby, since representatives of the Ministry of Agriculture came down here to find out what we’re doing, because we are getting results that nobody else is getting”.

Trinidad and Tobago-based Shalima Mohammed is a strong advocate for health and wellness practices, based on traditional and/or alternative healing. She has presented research papers on traditional healing at the University of the West Indies (UWI) in Trinidad, at the Anton de Kom University of Suriname, and in Indore, Madhya Pradesh in India.